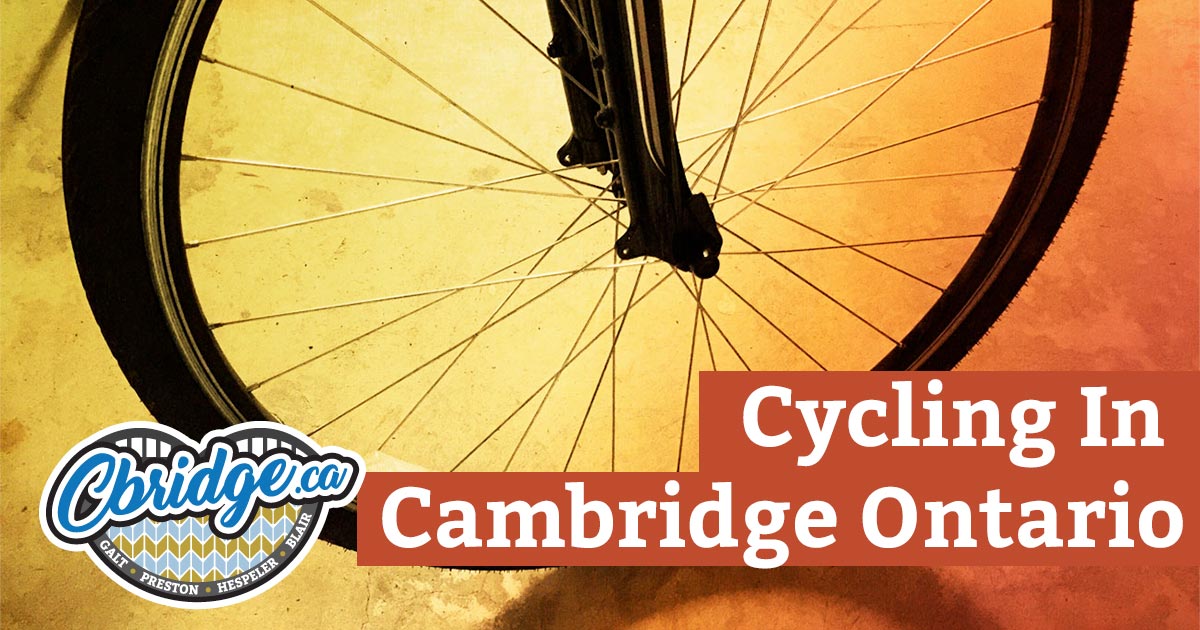 Last year I decided to join the ranks of cyclists in Cambridge. I bought a proper hybrid bike, great for city biking, with the goal of cycling to work. I have about a 5k commute from Preston to Bishop Street and Can-Amera Parkway, so it’s definitely manageable. I can’t say I always bike, but while the weather is nice it’s really great to have the option to hop on the bike. It takes me 15-18 minutes and is generally a good experience. There are bike lanes pretty much the whole way from my neighbourhood to work, so I’m definitely fortunate in that regard.

Now why I bring up the topic is that I feel there are more than a few problems with being a cyclist in Cambridge. I’m not some militant, anti-car type, I mean, I do live in Cambridge after all. I just wanted to point out a few things that I’ve noticed in my year cycling around this fair city.

Lack Of Infrastructure To Support Bikes

In getting a bike I’ve given the old college try when it comes to doing the local stuff. I live about 2k from Hespeler Road, where many of the amenities in this city exist. I think pretty much everyone can agree that you have to be a bit of lunatic to actually cycle along with traffic on Hespeler Road, so you’re left biking on the sidewalk. While not ideal, it does get you from point A to point B much more safely than entering the 6 lanes of heavy traffic.

While getting to somewhere on Hespeler Road is possible, it’s when you get to your destination that leaves something to be desired. Pretty much every strip mall on the road is entirely devoid of bike racks. The mall that features Beertown and Burger King is the absolute worst offender for this. There is a giant light standard near Beertown that you can lock your bike to and that’s about it. I suppose it’s a chicken or the egg situation. Is it that nobody in Cambridge bikes, therefore there is no demand for bike racks? Or is it that nobody bikes in Cambridge because there is no infrastructure to support securely locking up a bike?

I can’t paint all businesses with the same brush here though. The Cambridge Centre does have multiple bike racks, along with McDonalds and Crabby Joes. But that is a very small minority of businesses that exist along this road. I’d love to see businesses take up the challenge and install bike racks. I believe it’s a case of, if your build it, they will come. And this isn’t just Hespeler Road either. The town cores of Cambridge do have bike parking, but the thing we need to realize is that Hespeler Road is literally the core of the city. For too long we’ve tried to pretend that Hespeler Road isn’t a downtown because we already had 3 downtowns, but that’s a blog for another day.

In my travels both biking and driving through town I’ve noticed a lot of terrible cycling going on in this city. There are a lot of perfectly safe cyclists out there who abide by the rules, wear helmets and get from point A to point B without issue. My beef is with the other breed of cyclist on the road. By far the most frequent issue I see is people biking the wrong direction in traffic. This drives me up the wall. Bikes are supposed to abide by the same traffic flow rules as cars. You wouldn’t see a car decide to drive the wrong way against traffic, yet that’s essentially what I see quite frequently on Cambridge roads perpetrated by cyclists. I’ve had a few times where I’ve had to dodge around cyclists who were going the wrong way in a bike lane towards me. Sometimes it may be easier to take inside lane to get where you’re going, but that doesn’t mean you’re not endangering other cyclists and motorists with your actions.

Bikes have always been the most viable alternative to driving, but there is really no bike literacy involved to just hop on a bike.

I don’t know where the blame for this might lie. Is this just poor education of cyclists when they learn how to ride in the first place? Bikes have always been the most viable alternative to driving, but there is really no bike literacy involved to just hop on a bike. Are people simply not learning the rules of the road when they start biking and carrying bad habits forward? I know as a kid I was taught the rules of the road when living in a small town where I could viably bike anywhere I wanted. I could almost see it being a city issue. While there are some parts of Cambridge that are easy to cycle, there are others that are kinda death traps, like say trying to cross the 401. There really isn’t any viable way across that doesn’t involve hopping into live traffic lanes that don’t have any accommodation for cyclists, or pedestrians for that matter. Are people just afraid to bike in this city, so all that’s left on the road are the folks crazy enough to pedal these streets?

While I may paint a bleak picture of biking in Cambridge, it’s not all bad. I live not too far from some great trail systems in Preston. Off of Speedville Road I can catch a trail that will lead me to downtown Hespeler, though unfortunately that route will be out of service for awhile while they do 401 repairs. And in the other direction I can catch a route through Riverside Park and into Preston. A few blocks away I can pick up with a Bob McMullen Linear Trail and come out behind the Preston Auditorium. It’s a nice little loop and a great way of touring around Preston. Thinking back Cambridge’s connection to the Rail Trail to Paris was actually my first introduction to Cambridge. Growing up in Paris I would bike with friends into Galt and have fond memories of grabbing lunch at George’s. This city does have a lot of great trails, they just don’t always connect up to something if you’re trying to get somewhere using them.

Overall Cambridge does have at least a start when it comes to cycling around this city. There are bike lanes in a lot of central Cambridge, but many of the main arteries through town remain pretty unfriendly to bikes, Hespeler Road, King Street/Coronation Boulevard/Dundas Street and Franklin Boulevard in particular. The one thing I’m wondering with the installation of roundabouts on Franklin whether bike traffic is being factored in. Working off of Bishop Street it is one of the very first ones to be installed, I really hope I won’t be taking my life into my hands every time I choose to bike to work. I know on my 5k bike to work I can see maybe 4 or 5 other cyclists traveling along the same route I do on certain mornings. While it’s not a lot, it at least shows me that people in Cambridge do use these amenities during the small sample time I’m on the road.

There are a bunch of bike infrastructure projects on the go in Cambridge at the moment. Tritag currently lists 12 active project that are looking to improve bike infrastructure in town. It’s great to see these projects, even if they do create construction headaches for everyone. Now that I commute to Guelph I see how nicely a well laid out bike system can work. So many people rely on it as a means to get to and from school/work and it would really be a great thing to see happen in Cambridge.