Cambridge Needs To Start Acting Like A City On Gaslight District 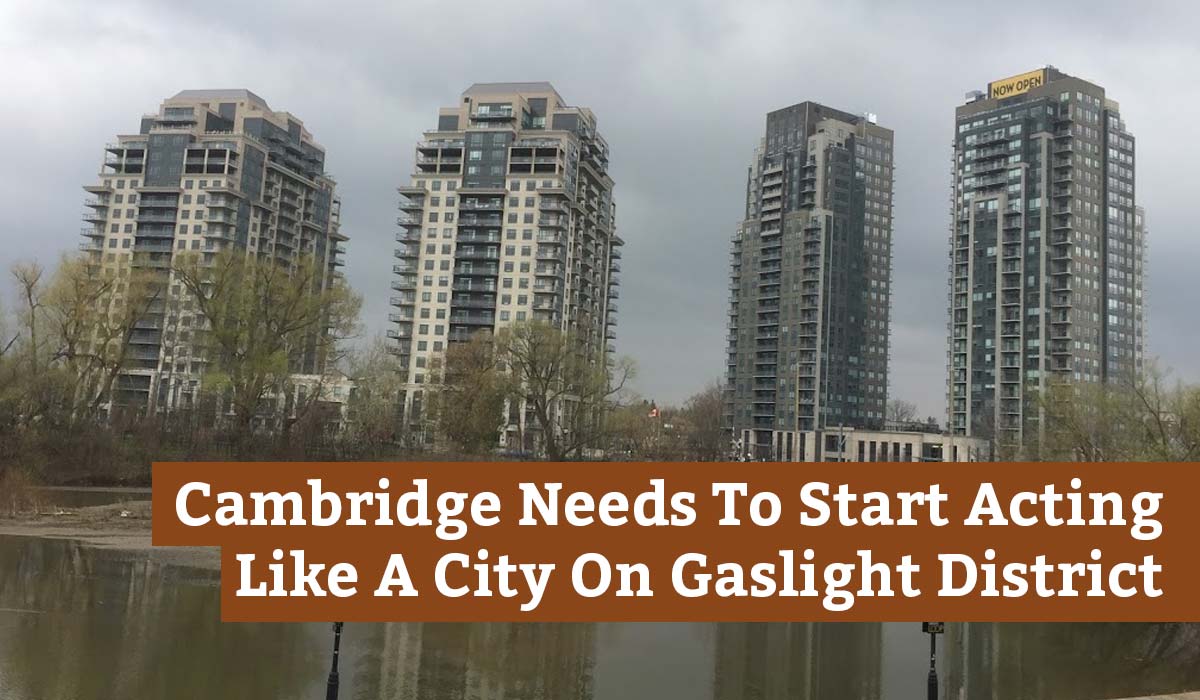 Recently there has been a lot of chatter about the height of the condo towers in the proposed Gaslight District development in Galt. Nicholas Ermeta is calling for the Gaslight condo heights to be reduced to 10 storys. This isn’t even an idea, it’s basically photo op to tell developers to adhere to the status quo and to cram this project back into the existing box of restrictive local bylaws. The problem with many of these bylaws is that they were drawn up well before the Places To Grow Act, which aims to increase population density and curb urban sprawl in Ontario.

The reality with most condo projects is they are essentially the currency with which other aspects of a project gets financed. Without the condos, the Gaslight District is still a pipe dream for Cambridge. Halving the amount of condos also means cutting into the cost to build a tech incubator. It means scaling back the employment aspects of the project that Cambridge so desperately needs. Heritage restoration projects aren’t cheap or easy, otherwise every developer would do them. Nobody likes the idea of tearing down heritage structures and I think this project strikes a good balance between modernization and maintaining local heritage. With The Standard project in Hespeler the remediation of old industrial properties isn’t viable without the newly built rental building. Now the first phase is nearly ready, work will begin on The Standard building, a condo project that will take a dilapidated factory and turn it into viable living spaces. As much as people complain about The Standard project in Hespeler, what would you rather have, a brownfield in one of your downtown cores? Or people actually living and spending money in your beautiful downtown core?

Nearby Cities Have Already Moved Past These Issues

Cambridge doesn’t exist in a vacuum. While we’re arguing over the height of these condo projects, other nearby cities are building. The River Mill condo project in Guelph is an 18 story project that is looking to open this year. The project is in the downtown core and residents used the same “but think of the Church steeples” argument, and it was eventually passed by council. Guelph is a very similarly sized community to Cambridge, with plenty of heritage architecture, a river, a theatre, and a pretty thriving downtown. In Waterloo there’s the Barrel Yards condos. At 25 floors, this project is similar in size to what was originally proposed in Cambridge. This project is not too far from Uptown Waterloo and builds on land formerly occupied by the Canadian Barrel Co. Waterloo is a smaller city than Cambridge(if we set aside it’s inextricable link to Kitchener) and are building condo towers much larger than the 10 story restrictions we have here.

Cambridge City council is trying to look big picture with this project. I believe many people in town like to feel that Cambridge is still a small town when really we are a decent sized city. Cambridge ranks 40th in Canada by population, larger than Whitby, St John’s, Kingston, Thunder Bay, Niagara Falls(who recently outbid Waterloo Region for the Canada Games) and Victoria to name a few. We’re no longer a small town and we need to adjust our thinking accordingly.

The fact that other comparable cities have already hashed out these bylaw amendments 7-8 years ago and have tangible projects built is really telling. Cambridge tends to lag behind on many issues, I blogged about one such an issue last year with regards to food truck bylaws. Cambridge is trying to play catch-up by taking out 2 birds with 1 stone, creating a tech/innovation space in town while also creating condos that break the mold of the antiquated 10 story tall limit. Fighting developers tooth and nail about every project in town just paints Cambridge in a bad light. As you can see, there are other cities nearby willing to play ball with developers.

The Gaslight District is a big, bold stroke for Cambridge as a city. Neutering the project by removing over half the condos is a decided step backwards. Gaslight is a huge part of the future path for our city. I feel in 5 years time our downtown could be absolutely transformed by many of these changes. I’ve seen what drastic transformations occur in Kitchener, Waterloo and Brantford can do for a downtown over the span of 5 to 10 years. Council has laid out a path that we could see a similar transformation here, we just need to actually see it through.