A Day In The District Brings Sizzle To Cambridge 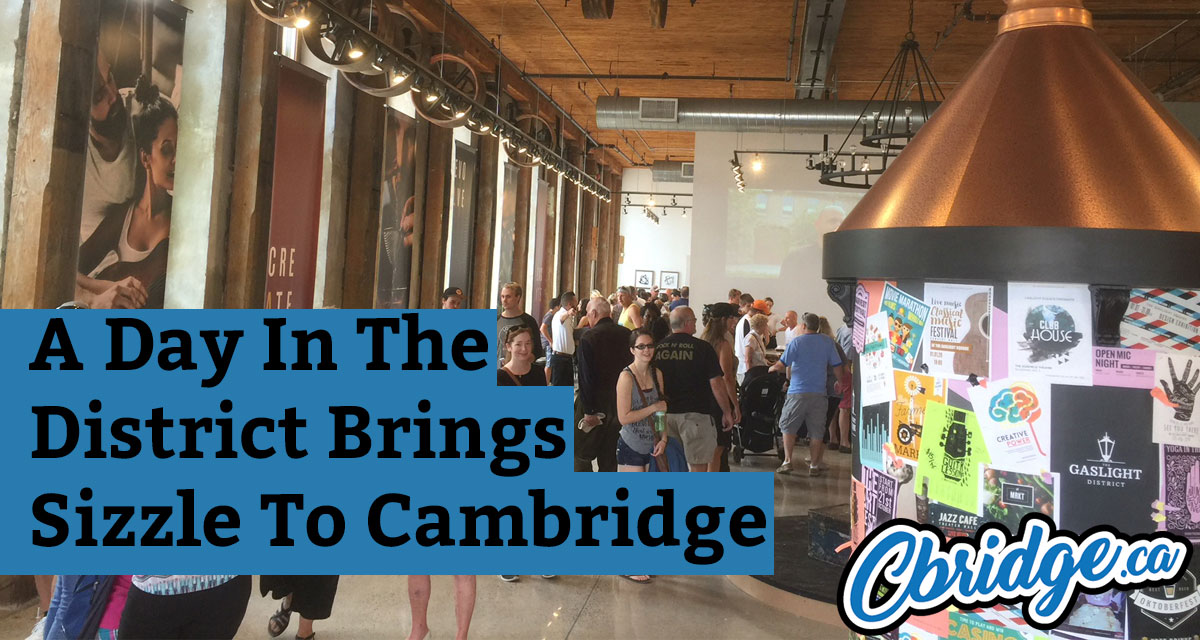 Today was the big formal launch of The Gaslight District, the new project that is looking to transform the former Southworks Outlet Mall location. HIP Developments threw a huge bash on the site before the real demolition begins on the project.

A Day In The District aimed to show what was possible for the future of Cambridge. This wasn’t just throwing an open house BBQ to introduce their vision to the public. This was less a party than a full on manifesto of intent. Sleepy, backwater, small town Cambridge is dead. A bold new vision has been laid out. The gauntlet has been thrown down, and I for one couldn’t be happier.

A Fun Day For The Kids

I ended up going to A Day In The District twice today. Earlier in the day I was with my family and got to see the kid friendly aspects of a well run event. Awesome balloon characters created by Drew Ripley were a big hit with my daughter. We saw a few magicians that were really popular with the kids. The Preston Scout House Band had an instrument demo booth that was both loud and fun to get kids involved. There was a wall that allowed kids to hurl paint covered sponges to create the illusion of Fall leaves on a tree. There was paint easels you could create something and take home your painting. And on and on. It was amazing all the activities there that involved local businesses that seemed very fresh and unique for kids to experience. This to me just felt like the organizers covered all angles. While it’s awesome to book a big musical lineup, it was the complete package as far as an event. They had possibly my favourite new food truck, Kona Pizza at the event. They serve literally a cone of pizza, so easy to eat without the greasy mess. I had tried this amazing concoction at the Kitchener Food Truck Festival a couple of months ago and they did not disappoint. Food Trucks has long been a sore point in Cambridge, as the bylaw is still too restrictive to allow for anything but special event permits. If the Gaslight District aspires to be the destination for something like the amazingly well attended Kitchener Food Truck Festival, this is a huge win for Cambridge. I was absolutely in awe of how many people came to this event. I know today was practically one of the busiest days of the year for events, with Open Doors Waterloo Region, the Hespeler Harvest Festival and events in nearby places like the St George Apple Festival and Bestival in Kitchener as well as all the harvest markets in Galt, Kitchener and St Jacobs. In other words, there were tons of other things to do locally and people showed up in droves for this event. Walking down Grand Avenue the sidewalks were packed in ways I’ve never seen. I think an event like this, if the Gaslight District aspires to be an event destination only further highlights why the pedestrian bridge is being built across the Grand River.

One of the questions I had in looking at the crowd was what was the split of locals versus out-of-towners? My feeling was there were a lot of people from outside Cambridge checking this event out. I think the locals came out in droves to see the headline acts, but during the day I just got the vibe it wasn’t primarily Cambridgians. This of course makes sense, these condos aim to increase population density, and that density comes in the form of people outside Cambridge.

A Boon For Local Businesses

We went home for a bit and I decided to go on my own to see Steven Page and Serena Ryder. I showed up roughly 5:20pm and foot traffic towards The Gaslight District could be seen from blocks away.  I spoke with Victoria, the owner of Brick & Mortar Market and she said it had been super busy all day. That to me was great to hear knowing that nearby businesses benefited from such a big event happening nearby. I recall seeing lineups out the door at Barnacle Bill’s and My Thai, both on the way in and leaving the event.

Up Front For Steven Page

I ended up meeting with friends and getting a pretty good spot up front for Steven Page. This was actually the second time I’ve seen him perform this summer, as I went to go see him play as part of the Trans Canada Highwaymen, a kind of Canadian rock supergroup. I wore the t-shirt I bought at that show and got a shout out from Steven from the stage as he had actually noticed me wearing it in the crowd. That was definitely the highlight of my day. As an added bonus for the Cambridge crowd Craig Northey of the Canadian band The Odds was actually playing lead guitar with Steven’s touring band, so we even got to hear Someone Who’s Cool mashed together with BNL’s Alternative Girlfriend. It was quite awesome.

Seeing someone who could be considered a successful international recording artist from his time with the Barenaked Ladies playing a packed gig in Cambridge really warmed my heart. I’m a big music guy and have seen so many huge acts over the years, but there was just something about the fact he was playing in my hometown that makes me so happy. Now I’ll admit Serena Ryder really isn’t my speed, but I stuck around for 5 or 6 of her songs. Even if she’s not my speed, there were certainly tons of people who were right into her show. As a friend mentioned tonight, Serena Ryder is one of the top Canadian recording artists right now, so it really is quite a coup to have her play to us here in Cambridge.

One of the things that was abundantly clear about this event is it would have a cost a mint to put on. It seemed there was no expense spared here. There were even plane flybys that happened over the event. It was put on to get people excited about this project and to get people to put down a deposit on a brand new condo. HIP Developments must have hustled quite a bit just to get the space pristine and ready to host this event. The sales office, the former Tootsie’s Shoes site, was entirely transformed and looked amazing. Southworks Outlet Mall only closed at the start of July and the former shoe store looked like the amazing mix of old and new this project is supposed to bring to the fore. While this project has been met with a fair amount of positive response from the public, it has also had its detractors. While I don’t believe this event was to win over those people, this was definitely a play to win over the hearts and minds of many in Cambridge who can buy into their big vision of the future of Cambridge. After experiencing the event today, I’m so excited for the Gaslight District. I believe it will be an absolutely transformational project for this City, especially when viewed in tandem with the various other projects going on in Downtown Cambridge. What I loved about this event was the amount of swagger and panache it was executed with. It was a bold stroke for Cambridge and something long overdue. I’m proud of the idea that we hosted an event that great. Our City is being remade right before our eyes and I look forward to seeing the results.

I just read that HIP Developments sold out all the condos in the Gaslight District. If anyone was looking for a true indicator of how well yesterday went, this is really it. Tons of people literally bought into this vision and the whole project is off to a running start.