Preston LRT Stop A Positive For The Community 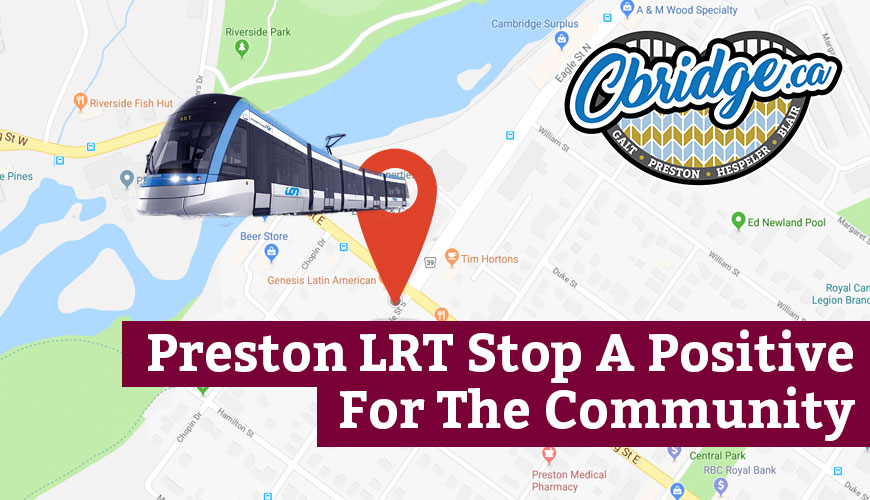 One topic I’ve been wanting to hit on for awhile in this blog is the ION LRT route through Preston. This is something I’ve previously come out in favour of and I still hold to that stance. Many people are upset about the idea of losing their property through the expropriation process and that I fully understand. I think anyone in the same position would be upset. There have been those that have lobbied, written the paper, shown up at Regional council and made their displeasure known to Cambridge council or anyone else who will listen. The issue at hand is that the Region of Waterloo has planners who have been going through this process and assessed the whole project from all angles. They wouldn’t choose to expropriate 8 private residences and a few business properties if they didn’t have to. I’m sure many other options were explored and this was the result they arrived at. While it may be a difficult pill to swallow, we task public officials with making tough decisions for the public good, even if it isn’t the popular decision. 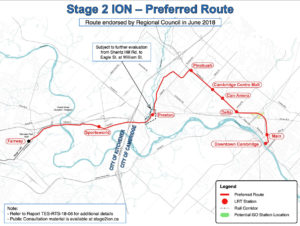 Need to break a few eggs to make an omelette

During the planning of the LRT through Kitchener and Waterloo there were also property expropriations, but I don’t believe there was anything of the magnitude of what’s going to happen in Preston. Unfortunately this is the cost of trying to bring new infrastructure into established areas and isn’t a new fight in the slightest.

Landowners who challenge an expropriation have almost no hope of blocking it, but in most provinces they can have their demands for better compensation adjudicated by a quasi-judicial body.
– From Globe & Mail, Jan 11, 2011

People can get mad and stamp their feet all they want, but in the end the government is always going to win in these battles. You can really only fight to get fairly compensated for the property being expropriated. I definitely sympathize with those affected, but I also know people can move elsewhere in town with fair market compensation.

The current state of Preston

If we’re looking at the area of Preston that this is going happen(Shantz Hill, across the Speed River, through the neighbourhood up toward King and Eagle, then down Eagle Street), it’s tough not to notice how much this area of town could use revitalization.

This area is one of the primary gateways to Cambridge and it’s currently not doing a great job making a first impression for our community as a whole. In other words, the area from Shantz Hill to Eagle Street is crying out for redevelopment.

The upside for Preston as a whole

While my aim here isn’t to be overly critical of Preston, I think the LRT coming through the area could be an absolute blessing in disguise. This area needs to be reimagined and putting an LRT stop right there will be the best thing that’s happened to Preston in a long time. The reality is given the route of the ION LRT, Preston could viably become the most sought after neighbourhoods in town. When looking at all the other stops along the route in Cambridge you begin to realize that the Preston stop is the only one that actually has any significant population density near it. There’s 2 large condo towers nearby, as well as a beautiful, established neighbourhoods not too far from the river. There’s the nicest park in Cambridge just steps down the road.

Nobody lives near the Hespeler/Pinebush stop. The transit hub at the Cambridge Centre connects much of the city, but doesn’t have that many people living nearby. Canamera has some nearby apartment buildings, but no real close neighbourhoods. The Delta stop has some nearby neighbourhoods, but none of them are tremendously close. The Ainslie stop is going to be a stones throw from the Gaslight District and some established neighbourhoods, but it will also be the end of the line. If you’re living in Preston and looking to work in KW, you’ll have the advantage of last stop on the way out of Cambridge and first stop on the way in. That’s a huge positive for Preston.

Consider what redeveloping that area of town would do for Preston as a whole. Franchisees like Tim Hortons/Dairy Queen might actually want to spend money and upgrade their facilities. Businesses like The Argyle Arms and Genesis can look to move to other locations if their properties are being expropriated, potentially increasing the density of Downtown Preston with new restaurants. Locations like Mr Sub and the Preston Chip Wagon are vacant restaurant spaces I can think of off the top of my head. Preston could viably get a nice and modern new Beer Store (and LCBO for that matter) like we’ve seen when Hespeler redeveloped theirs a few years ago. Keleher’s moved from it’s Townline location a few years ago, so it’s shown it can move and thrive in a new location. We could see strip mall owners actually invest in revitalizing their properties, like we’ve seen in other plazas in Cambridge(Dunbar & Hespeler Rd and Westgate Centre in West Galt come to mind). Updating rundown malls improves vacancy rates and attracts higher quality tenants. 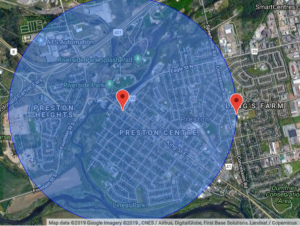 Everything within 800m of the Preston ION LRT stop

And that’s just talking about improving what currently exists in the area. Adding an LRT stop in Preston could have wide reaching effects for the area. According to a 2017 article in the Waterloo Chronicle, there’s been over $2 billion in investments in Kitchener/Waterloo in areas that are within 800m of an ION stop. Just for a frame of reference, that covers all of Downtown Preston, all the residential area of what would be “old” Preston, all of Preston Heights and the 401 exit, and up to Speedsville and Concession. It’s a huge area. This is why it’s been so important to put an LRT stop in Preston. The transformative potential of this stop for Preston and Cambridge as a whole is not to be underestimated. This is huge for our community.

You can already see the ball rolling for investments in the area along Eagle. Cambridge KIA is building a new facility, the former Cambridge Flooring building is undergoing a pretty big facelift, the complex that’s served as offices for our last few MPPs was also purchased and being revamped and a new 6 storey condo building was built along there a few years ago at Eagle and William. The gears are already in motion. I feel like the area along King up to Fountain has been frozen out of many of these developments/acquisitions because there was still so much uncertainty as to where the route would actually end up going.

While there are property impacts that will effect the Preston everyone around here has grown up in and remembers, this whole project is about thinking about future generations in our region. The goal is to make our communities less dependent on cars to get around. And in the long run, this could genuinely improve an area of town that desperately needs it. Preston will be better for it once we see this project through to completion.