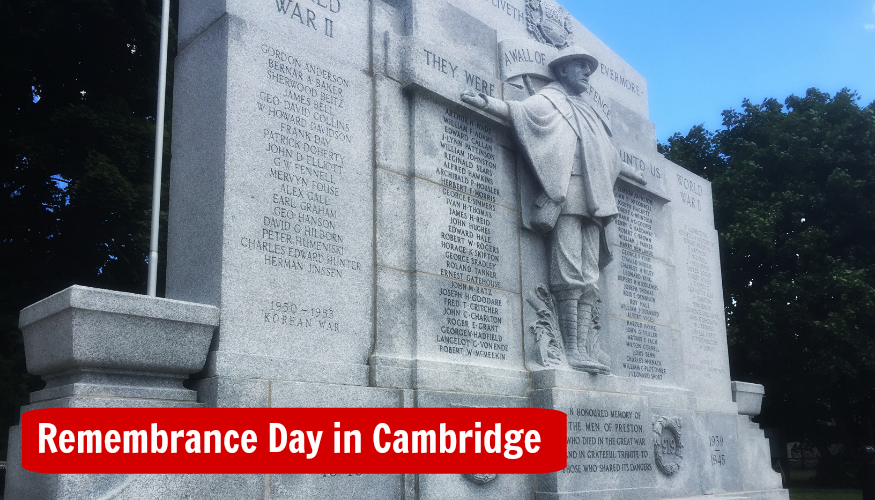 November 11th is a day Canadians take time to remember all those who fought and continue to fight for our freedoms. 2018 marks the 100th anniversary of the armistice that ended World War 1. In Cambridge you have several different opportunities to show your support. Here is a breakdown of Remembrance Day ceremonies and events broken down by community: A Remembrance Day parade will kick off at the Royal Canadian Legion Galt Branch 121 at 9:45am (Ainslie and Veterans Way). The parade will depart at 10:15 am and move through Galt, culminating at the Queen’s square cenotaph (Grand and North/South Queen’s Square). There will be wreath laying ceremonies and music from the Galt Kiltie Band as well as a 2 minute wave of silence at 11am. The Branch will be open after the ceremony for comradeship, refreshments and entertainment.

Our friends at the Queen’s Square branch of the Idea Exchange will be offering music and refreshments today before and after the Remembrance Day ceremonies in Galt. They will be broadcasting the service from the cenotaph in Queen’s Square. Time: 9:30-12:30.

100 bells will be ringing to mark the Bells of Peace starting at sunset (5:01pm) on November 11th to help mark the 100th anniversary of the end of the first World War at the following Galt locations: City Hall, Knox Presbyterian Church and Trinity Anglican church. Please take a few moments to pause and remember all those that fought for peace.

Veterans and legion members will leave by bus at 10am from the Royal Canadian Legion Hespeler Branch 272 (26 Schofield Street). Veterans are asked to form up at 10:15am for Remembrance Day ceremonies in front of the Hespeler Cenotaph (Tannery & Queen Street) which starts at 10:30 am. There will be laying of wreaths and a 2 minute wave of silence at 11:00 am. The Hespeler Legion will be offering light lunch and comradery after the ceremony in the Legion Hall (26 Schofield St).

Bells of Peace will be rung starting at 5:01pm from St. Andrew’s Presbyterian Church in Hespeler.

Form up in Preston will begin at the Royal Canadian Legion Preston Branch 126 at 10:15 (Westminster and Margaret). A march to the Preston Cenotaph in Central Park will begin at 10:30 (King and Argyle). Wreath laying ceremonies and a 2 minute wave of silence at 11am will follow the parade. Members of the Preston Legion are opening the doors after the ceremony for fellowship.

Bells of Peace will be rung starting at 5:01pm at the following Preston locations: St. Clement’s Catholic Church and St. Peter’s Lutheran Church. Many Cambridge residents are expected to attend ceremonies at cenotaphs throughout the city.