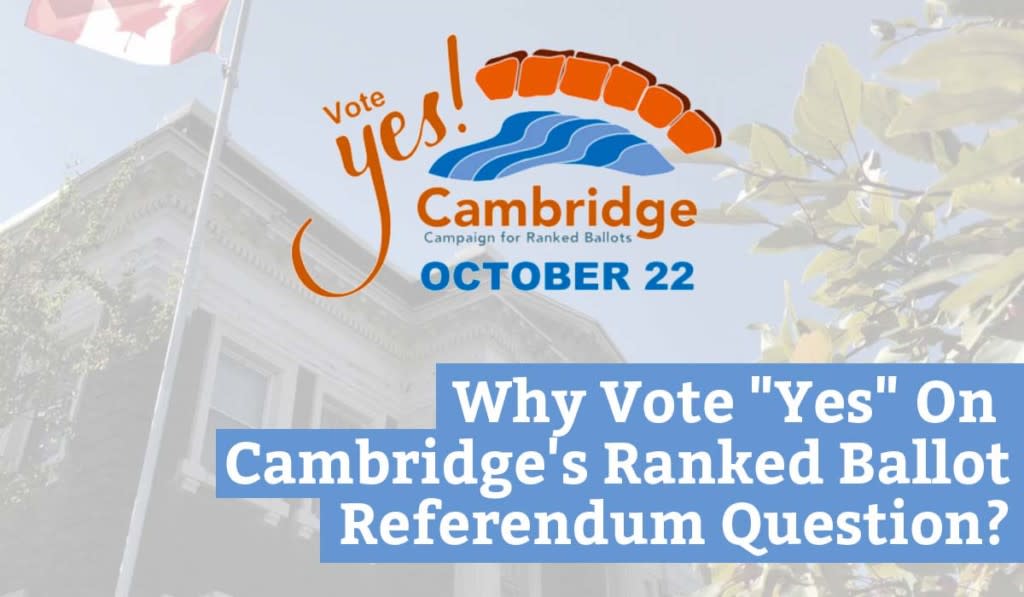 This post was submitted by the Yes! Cambridge – Campaign for Ranked Ballots initiative to raise awareness for this election’s referendum question on Ranked Balloting.

There has been much discussion about voting reform, on the local, provincial and federal level.  Much of the discussion has been hypothetical; what it would have looked like had (name any election) been done under any other system than First Past The Post (FPTP).  Yes, we need to discuss electoral reform because I think many people have reached the conclusion that FPTP may not reflect the voting intention of our voting population.  The question is how do we get from here to there? The proposals and theories about electoral systems can make your head spin. If you do not fully understand system x or system y, how can you be sure which is best suited to our needs?

What does this mean and how will it work you ask?  Let’s look at the upcoming municipal election as an example. We have 5 candidates on the ballot for the position of Mayor of Cambridge.  Under our present system, everyone votes for whom they want and the candidate with the most votes wins. These votes are split between 5 candidates; it could be that the candidate who wins could have as few as 25-35% of the vote.  While this is a victory, is it really the will of the citizens of the city? In a Ranked Ballot system, we rank our candidates in order of our preference. When all the ballots are counted, if any one candidate has received 50% of the votes, they win the election.  If not, the candidate with the fewest votes is dropped off the ballot. However, the votes of those that voted first for this person are not null and void. Those voters 2nd ranked choice are redistributed to that candidate providing a new tally. This redistribution will continue until one candidate has achieved 50% of the vote.  In this way, we are electing a candidate that the majority of the electorate have voted for. Voting “YES” in the referendum, will put us on a path to voting reform. It will mean that the candidate who wins will have gained 50% of the vote of the electorate. It means that we won’t see anyone winning a seat on council with less than 50% of the vote.  Ranking your voting choices gives a stronger voice to the electorate.

The simple thing is for me to say vote “YES” in the referendum on election day.  However, I urge you to educate yourself on this topic so that you understand the benefits of a Ranked Ballot in municipal elections.  There are of course those who will be against it, as there are those of us who are for it, but at the end of the day, an informed decision is the best one.

Marjorie moved her family to Cambridge in 2001. She is a community advocate around the many issues of Poverty and is interested in voting reform that allows everyone to have their voice heard.