What To Do With The Preston Springs Hotel? 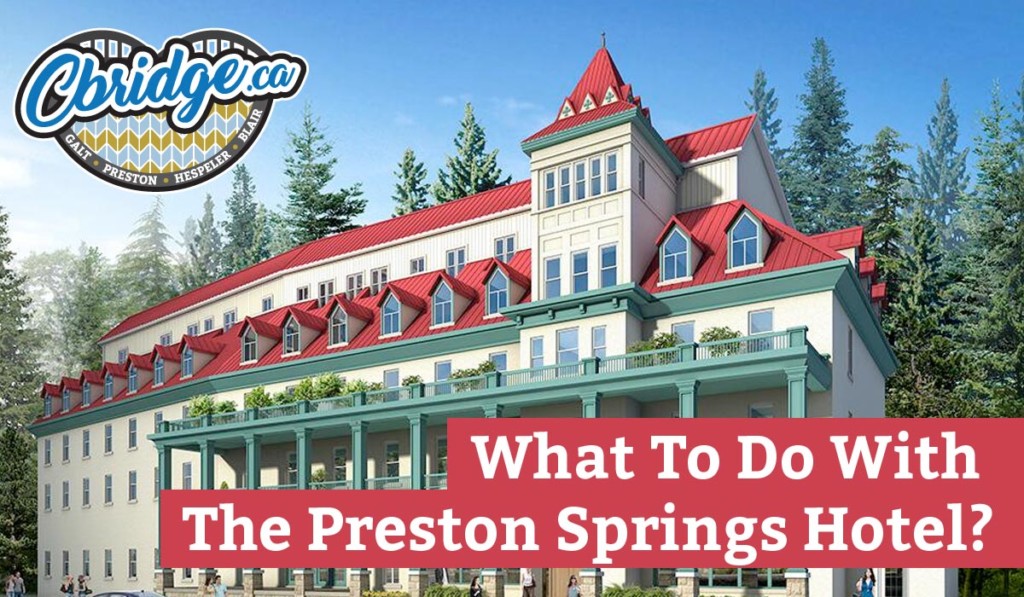 Recently the question has been raised again about just what to do with the Preston Springs Hotel? The grand, old building facing the corner of the busy intersection where Fountain and King Streets meet has been the proverbial “elephant in the room” for many years in our community. It serves as one of the gateways of our community, yet has fallen into disrepair. Sitting vacant for over a quarter century, the time has come to deal with the problem that exists in Preston one way or the other. Here’s a look at a few of the options available for this heritage building. 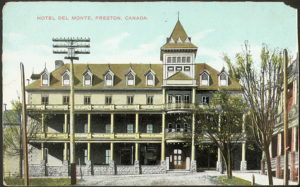 This is the option most people would love to see, though also it seems to be the least attainable. Over the years many, many developers have tried to take a crack at the idea of restoring the former Del Monte Hotel, only to put the property back on the market yet again. There are many challenges involved with bringing this beautiful building back to its former glory. The first is parking. While the most recent owner Paul de Haas of the property has acquired property around the building and claims that parking isn’t an issue. The reality is the property is just awkward. There is no parking access from Fountain Street, and if there were it would probably be a calamity given the flow of traffic along that street. The existing parking is accessed from behind, on Abraham Street. One of the biggest questions is what would be what purpose would this building serve when pouring millions of dollars to restore it?

Mayor Doug Craig suggested to turning it into affordable housing, but I don’t see how this is even a viable option. To become a home for low-income earners the building would have to clear many of the same roadblocks that resulted in the recently announced closure of St Luke’s Place in Hespeler. If they couldn’t manage the cost of installing proper sprinkler systems in a 42-year-old building, one can only imagine the cost of installing them in a 128 year old building. And if it’s meant to be a modern living space much of the electrical would need to be upgraded to accommodate the technology needs of 21st century renters. If the wiring is anything like the century home my parents owned when I was growing up, this could be a huge issue.

2. Knock It Down And Start Over

This is obviously the nuclear option. The building is decaying at an alarming rate, many of the windows are broken, leaving the interior of the property susceptible to the elements. The City recently erected temporary boarding over many of the windows, securing the building, but making it even more of an eyesore than with the broken windows in view. It’s been in disrepair for a few years now and who knows what type of damage exposure to a few Canadian winters might have had on the property.

The reality with this building is that it’s collateral damage in the era of the automobile. It was built in the era of horse and buggy. The region grew and the intersection it overlooks has become a vital artery for traffic in Preston and Cambridge. To see it restored to any semblance of function will need a huge amount of public money. If you weren’t a fan of the cost required to save the Old Post Office building in Galt, that would pale in comparison to the cost of saving the Preston Springs from the public coffers. In the end it may just make more sense to demolish instead of letting it decay before our eyes year after year.

One option I could see being viable is demolishing a part of the building and keeping the rest. I’ll admit that I’m just spitballing this idea, but stick with me here. Assuming this is structurally possible to do, my suggestion would be to knock down the left side of the building. 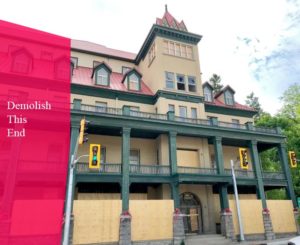 One of the big issues with the building is the sheer size of it. If it’s not practical as a living space, then it makes sense to cut down on the amount of space footage required to maintain for the property. What’s left of the building is the symmetrical tower, with 2 windows on either side. This would remove almost 2/3 of the building and allow us to keep a workable amount of the structure and the façade that faces directly down King Street. It also might make the space workable for the amount of parking that is available around back of the property.

What To Do With This Smaller Preston Springs? 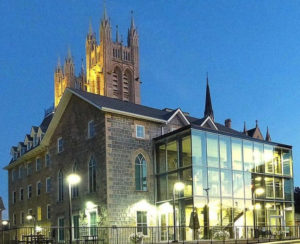 With the more manageable size of the building, we could then look at a smaller scale project to fill the space. Last year I had the opportunity to check out the Guelph Civic Museum and really think this is something we could work towards. This museum was itself a heritage restoration project, restoring the Loretto Convent building into a beautiful public facility. The museum has a great permanent display on Guelph’s history, as well as space for touring exhibits to display. If you haven’t checked it out, it’s definitely worth popping into Guelph for.

One thing I’ve long felt about Cambridge is that we do a terrible job of celebrating our own identity. We spend so much time worrying about the divides of Galt, Preston and Hespeler that we forget we’ve been a united community for nearing on 50 years. There is no consolidated place for Cambridge’s history to exist. Our sports hall of fame is located in a shopping mall. In Hespeler, The Company of Neighbours works to keep up a record of their history. How cool would it be if there was a museum where our shared history could be told? Maybe the Cambridge archives(now located at City Hall) could move into this facility as well?

Do The Springs Still Work? 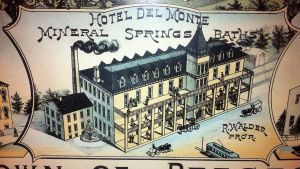 Maybe there’s someway we could get the hot springs functioning again in the basement. It would be awesome way to celebrate Preston’s heritage by having a functioning sulfur spring.

What does the future hold for the Preston Springs?

It’s pretty tough to tell at this point. The current owners seem content to just let the property decay and without a push from the City I’m not sure much will happen. And if the City does step in, I’d think it would be a tough pill to swallow for taxpayers in this City after a few large projects like the Old Post Office and Multiplex have been added to the tax bill. Maybe someone comes in with a grand idea to restore this heritage property to its former glory. Only time will tell. We can only hope something happens while the building is still in good enough shape to restore.

Have your own ideas for the Preston Springs Hotel? Let us know in the comments.