The Story Behind The Cambridge Turbos Name 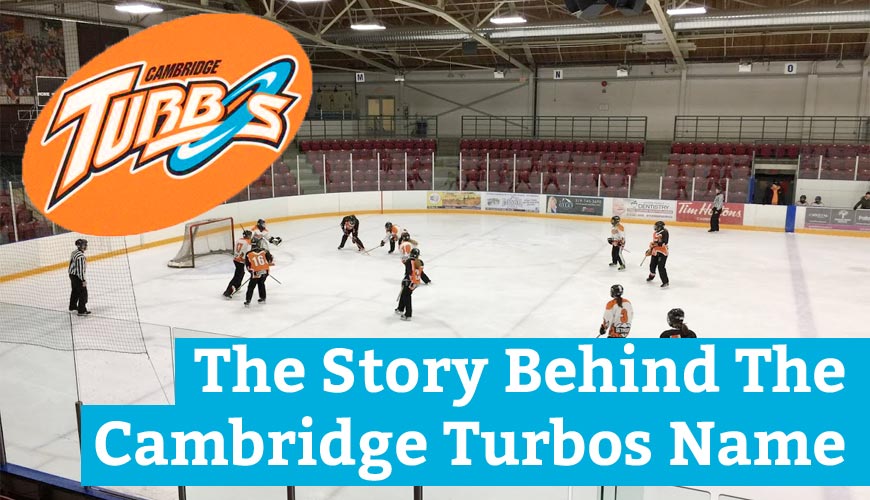 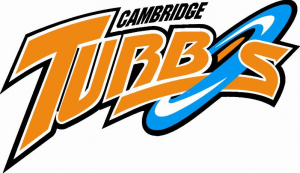 As the March 15th deadline for coaches to apply to be involved in the 2017-2018 season with the Cambridge Ringette Association is fast approaching, I thought it would be a great time to reveal a little truth behind the “Turbos”.

How do I know the secret behind the Turbos?

Because I was playing for Cambridge back in 1988 when the very first Turbo team hit the ice.

Before getting into the truth behind the name, let us explain a little bit about the sport of ringette. If you have never watched or played the “Fastest Game on Ice”, you may just think it’s exactly like hockey but with a broken stick and a ring instead of a puck. You may even brush it off as a game “just for girls.” But there are many more facets to the game than that, and if you ever have a chance to check out a game of the National Ringette League, you will understand why.

Ringette, like hockey, is played on ice with skates and sticks with six players per team on the ice at once. The objective is to score goals by shooting the object of play into the opposing team’s net at either end of the rink during stop-time periods of play. But this is where the comparisons between ringette and hockey really end. The stick is straight. The object being pursued by the players is a rubber ring, not a puck. There is no intentional body contact. And the rules of ringette make it a wide-open and dynamic sport.

The emphasis is on play-making and skating skills. Players cannot carry the ring across the blue lines on the ice. Only three players from each team, plus the defending goalie, are allowed in the end zones at the same time, which keeps the play open, puts a premium on sharp offensive moves, and requires defending players to skate close to their opponents. These features of the game demand the development of keen skating skills that give ringette players fantastic skating speed and agility.

To learn more about the game, check out the “Basics of Ringette“: 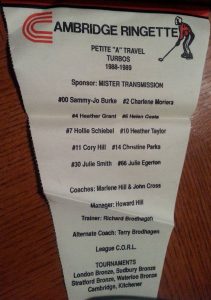 Who were the Turbos?

The very first Cambridge Ringette Association Turbos team was a Petite A Travel Team. Players and coaches now would recognize this as a “U12” team which includes players that are 10 and 11 years old. The team was small, with only 10 players including a goalie. Even with a small team, this Turbos team not only competed in CORL (Central Ontario Ringette League) but was able to compete in 6 tournaments, bringing home bronze medals in 4 of them. Due to the low number of players, everyone got lots of ice time and everyone was forced to play as a unit.

I went by my nickname Cory back then. I was a tom-boy through and through and boy did I love my ringette team. We had sleepovers at each other’s houses. We would go swimming together when not on the ice and spent a lot of time together at practices and doing dry-land training. We were friends. We played hard on the ice and laughed hard off the ice and when something happened to one of us, it happened to all of us.

So what is the “Turbos” secret? 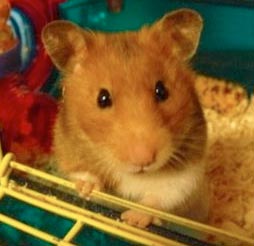 My former hamster Beans, as no photos of Turbo exists that I’ve found

Part way through the season my parents, who happened to be coaches on the bench, surprised me with a pet of my very own. A very cute, and very curious, hamster. He was a teddy bear hamster that loved to not only chew my sister’s socks, but to run on his wheel. He was fast, just like our small little team was on the ice. Turbo The Hamster became the mascot for our team.

To get us pumped before a game, my dad, who was the trainer on the team, would get us to all line up at the boards and run in one spot really fast just like Turbo. He would yell “Turboooooo charge” and then we shot off across the ice to bang on the boards in front of the parents in the stands. Turbo was with us in spirit on posters and we although it was kind of quirky and hilarious, Turbo really inspired us to play hard.

Turbo The Hamster became the mascot for our team

We had no idea that other Cambridge Ringette teams would adopt the name Turbo, and start doing their own “Turbo Charge”. We could have never foreseen that in less than 25 years the entire Cambridge Ringette organization would be known as the Turbos and that the name would be proudly displayed on jersey’s for National Ringette League players in tournaments not only across Canada but across the world.

Although Turbo has long since gone, I still get a little chuckle whenever I watch a game and see his name on the jersey. Rest in peace, little Turbo, as your legacy still lives on.

Now that you know the secret behind the name, it makes this segment from the Rick Mercer Report even funnier knowing it all traces back to a fast hamster!