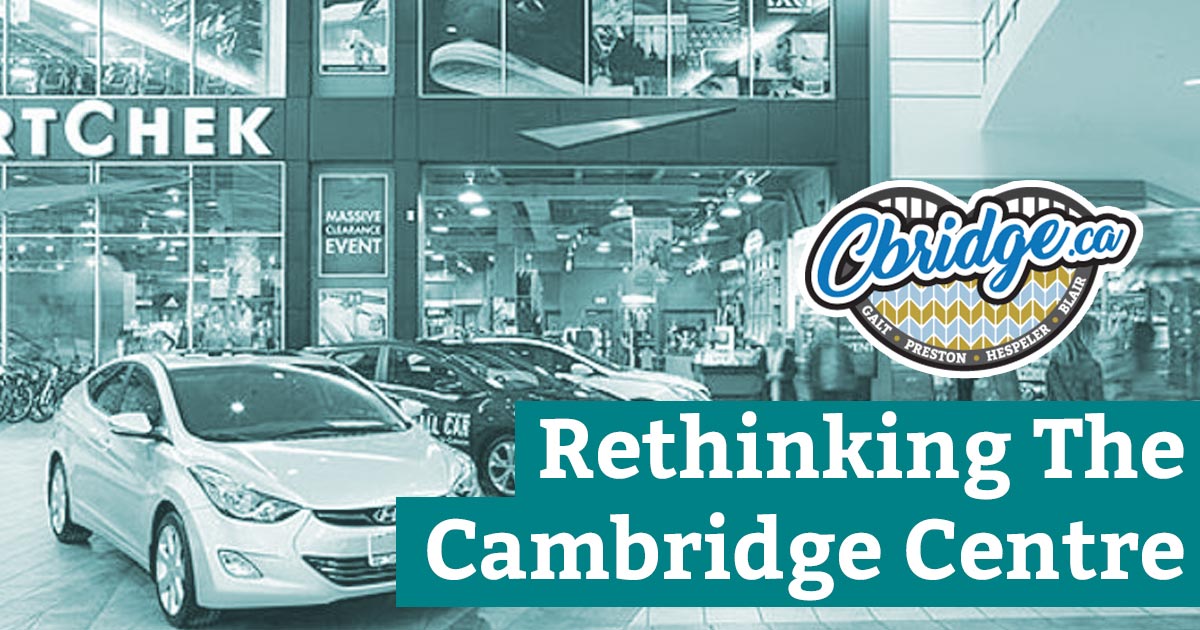 Back in June it was announced that Cambridge was going to be one of the 59 Sears Canada stores that would be closing. The Cambridge Centre location had already been transitioned from the full-line Sears location to an outlet store a few years ago, but all the same this definitely comes as a huge blow to our local mall. For a mall that had already lost one anchor tennant in Target back in 2015, losing a second is definitely tough considering they haven’t even finished redeveloping the former Target/Zellers space.

The Rise Of Online Shopping

One of the big undercurrents in the retail market right now is the fight against the tide of online shopping. Brick and mortar stores(as they tend to be referred to) are struggling mightily in United States. In Canada the problem doesn’t seem to be as prevalent as it is in the US, but since many retail chains are US-based companies it definitely has a chain reaction to us here North of the border. Amazon now is worth more money than all the major players in US retail combined. Coupled with other online retailers it genuinely paints a pretty terrifying picture of the market. These US problems are certainly landing right on Cambridge’s doorstep. Chains like HMV and Linen & Things have collapsed in recent memory, only to have similar chains swoop in and fill the gap.

The State Of The Mall

While I doubt anyone would argue all customers would entirely abandon local retail to shop online, there is plenty of reason to be concerned about the Cambridge Centre. I used to regularly go to the mall during the winter to walk on my lunch with co-workers. I’d see the comings and goings of stores, be they seasonal stores that only pop up in the leadup to the December Holiday season, or filler stores that seem to bounce around from location to location. For a long time there was a carpet store that seemed to just migrate from location to location. There’s a whole storefront full of Hyundai models as well as sprinkled throughout the mall. There are a lot of what you could class as no-name retail stores that you’d never see in nearby Fairview, Conestoga or Stone Road Malls. And that’s not to mention the whole wing of the mall that has been shut down to be remodeled.

Given that Target failed spectacularly in Canada, most foreign retailers aren’t going to bother to try the Canadian market again. And Target’s entry into the market entirely wiped out Canadian chain Zellers in the process. Since the #2 retailer in the US couldn’t crack the market, there isn’t going to be reinforcements looking to fill those gigantic retail pads anytime soon. From what I’ve heard the Cambridge Centre is breaking up the former Target location and entirely remodelling that end of the mall. But what happens to the newest gaping hole in the mall, the gigantic 2 floor Sears location?

Outside The Box Planning

I’ll definitely give credit to the Cambridge Centre for outside the box thinking with regards to the amenities that currently exist there. The NHL sized ice surface is constantly in use and certainly draws people into the Mall. Anytime I’m there the tables by the rink are always full. It’s a neat concept in that it’s essentially free entertainment, even if it’s just beer league pickup hockey. There is also the hockey training space up above the ice. The rebuild of the former John Galt Mall did so around the existing theatre, which at one time was commonplace, but now is rather rare to find a theatre that isn’t a standalone location. These decisions have made it so the Cambridge Centre isn’t 100% reliant on retailers, making the building more diverse and able to draw in people for reasons other than shopping.

When the news of the Sears location closing broke I saw a few people on local discussion threads floating the idea of building the Multiplex at the Cambridge Centre. Now initially I dismissed the idea as silly talk, but the more I thought about it, the more it does make sense. I’ve long advocated for a redevelopment of central Cambridge, with my main ax to grind being the Grand River Flea Market property, as well pushing the idea of Hespeler Road being the true centre of our city. But these all hinge on the health of the Cambridge Centre as a central cog of our local economy. Building the amenities of the Multiplex at the Cambridge Centre would require a total rethink of the design that we’ve seen to this point, but it’s certainly not unreasonable. It would check a lot of boxes as far as people grievances have had with the Conestoga location. It would be central, keep out-of-towners in Cambridge where they can spend money that goes into the local economy, near a transit hub as well as being along the proposed LRT route. It really could be a slam dunk if done properly. It would just require the current City Council to entirely toss the planning done thus far. But really since no location decision has been made we aren’t too far down the road with anything, which will allow us to pivot if necessary.

Or A Large Entertainment Complex?

A couple months ago I went with my family to Woodbine Shopping Centre. This was a trip that hearkened back to my childhood, whenever we’d visit friends in Toronto my parents would take us to Fantasy Fair. This was basically an indoor amusement park with rides, and possibly the best play structure around, with multi-floor slides and all sorts of other things for kids to do. Fantasy Fair was absolutely packed when we went on Family Day weekend. This would definitely serve as a draw to the Cambridge Centre with something unique that simply doesn’t exist at Fairview, Conestoga or Stone Road Malls. Cambridge already tends to draw out-of-towners to come shopping along Hespeler Road, this would only help attract people by virtue of offering things to do with your kids. What do you think should be added to the Cambridge Centre? Leave your suggestions in the comments below.