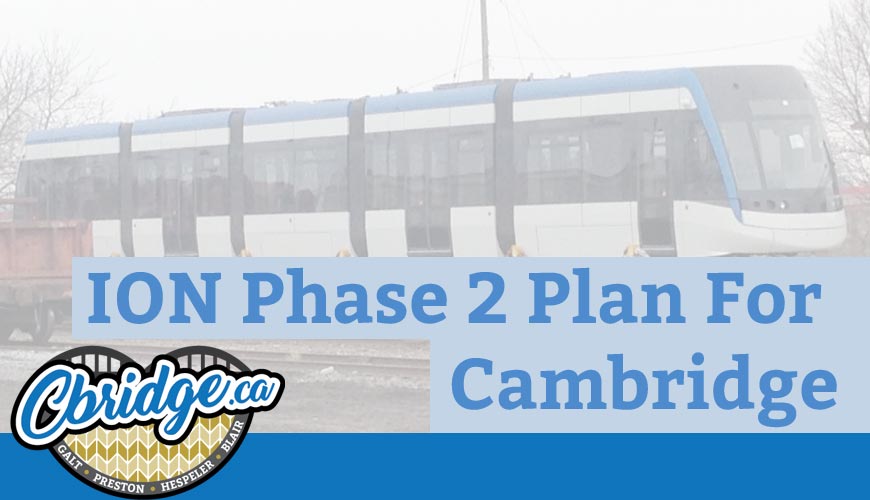 The proposed route for the ION LRT coming to Cambridge has been announced and now the conversation begins anew in town. I think one of the prevailing thoughts locally on this project has been that it was possibly a pipe dream and that Phase 2 would never actually come to Cambridge. It’s great to see progress being made as planning on phase 2 moves forward. I believe viable transit throughout Waterloo Region is very important. The idea that you could viably commute to KW in a reasonable amount of time without driving is definitely appealing. As someone who works in the tech sector, it’s important to have those types of amenities, even if it’s going to take another decade to come to fruition. With that said I had a few ideas to spitball on the whole ION project coming to Cambridge. 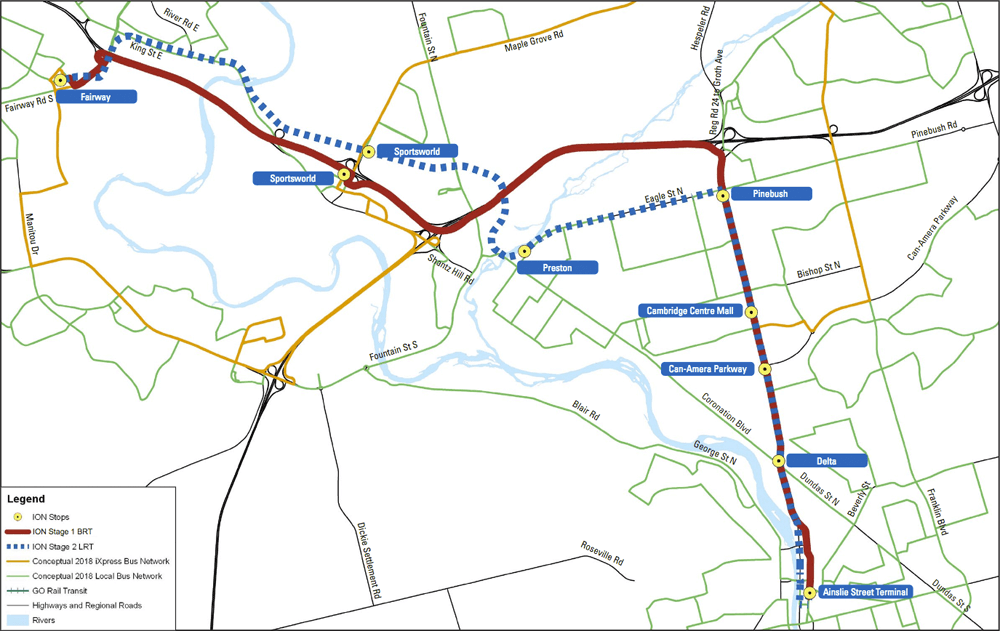 The thing I notice when it comes to the Phase 1 route versus the Phase 2 route it definitely feels like the Cambridge route is a lot more sparse than the KW route. That route features 19 stops, compared to just 7 on the Cambridge route. And very little of it actually goes near areas people actually live. Much of the route passes through industrial parks or commercial areas, which begs the question, is this meant to move people to jobs and shopping in Cambridge, or is it to move people from Cambridge to employment opportunities in KW? When looking at the route I could definitely see making a case for stops near Toyota, as well as between the Delta and the Ainslie Street terminal.

Now before I get too far into this I will state that I do actually live pretty close to the proposed route down on Eagle Street. This project would definitely impact myself and my neighbourhood as a whole. I’m not necessarily against the route going down Eagle, but I do feel there should be a stop at the corner of Concession Rd/Speedsville Rd and Eagle. My reasoning behind this is living in the closest neighbourhoods to Hespeler Road and the proposed Pinebush/Hespeler stop. According to Google Maps it would take 23 minutes to walk to this stop from Eagle Valley/Nantucket Village neighbourhood, compared to 13 minutes to a Concession Rd stop. As I mentioned, I live about as close as you could get to that stop, everyone else would be walking even further as you get deeper into the Langs Farm neighbourhoods. All the area around the Pinebush stop is no man’s land, with really no residential anywhere near North, East or South of there, with loads of big industrial lots, the 401 as well as the Smart Centre shopping area.

Ever since this LRT debate began in this region I’ve wondered this. Why exactly does the LRT run from the Conestoga Mall to Fairview Mall, yet in Cambridge the intent is to run the route all the way into Downtown Galt? The idea of running the route from one mall to the next had been met with a certain amount of derision, but I can understand the thinking. The malls are all well connected to transit. This makes them natural hubs to catch a bus to the rest of the city. To me building the LRT into historic Downtown Galt seems like overkill. As it stands the iXpress takes 9 minutes to get from the Ainslie terminal to the Cambridge Centre. It just seems silly to run pretty much the length of Hespeler Road then into Galt. Get the LRT to the Cambridge Centre transit hub and save a good chunk of project cost. As it stands there are still large swaths of Cambridge that won’t have direct access to the LRT(I’m looking at you Hespeler, and even the bulk of the Preston corridor), much the same as if you lived in West Kitchener.

With that being said, I believe much of the LRT route planning is also informing much of the development planning in Galt. The multiple condo projects, the Gaslight District, The Old Post Office project, they all fit together in a larger picture of the future direction of Cambridge.  Running the route into Galt may be something I don’t agree with, but I do think it’s part of the master plan to be able to get North/South through Waterloo Region. This area seems to just budding as far as an economic driver for Ontario as a technology hub.

Maybe Through Preston Instead?

@cbridgeca Why would you not have a stop at Cambridge Memorial? The plan seems to benefit business, not make travel easier for residents.

This was something I waffled on adding to this post since it was a somewhat contradictory idea to the couple others I presented, but I’ll go with it. I think the LRT would be more viable going through Preston than up Hespeler Road. Preston was literally the route with which the Grand River Railway ran through town. Much of this route is still quite accessible down Coronation with the wide boulevards down the middle of the street. As mentioned in the tweet, this does go right by the hospital, which of course is a big plus for certain residents of the city. Through Downtown Preston is trickier, but not unworkable. 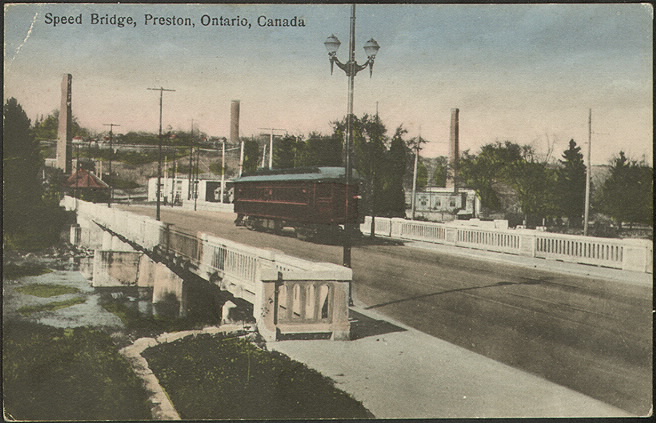 Just throwing ideas out here, but would it almost make more sense to create a route that looped down Eagle to Hespeler Road to the Delta then back through Preston? It would definitely cost more, but it might actually make more sense for a city as weirdly laid out as Cambridge.

Have Your Own Ideas For Getting Around Cambridge?

The City is looking for feedback on their transportation master plan, fill out this survey to take part. Or feel free to leave a comment below.