Internet Voting for Some; Miniature Canadian Flags for Others In Cambridge 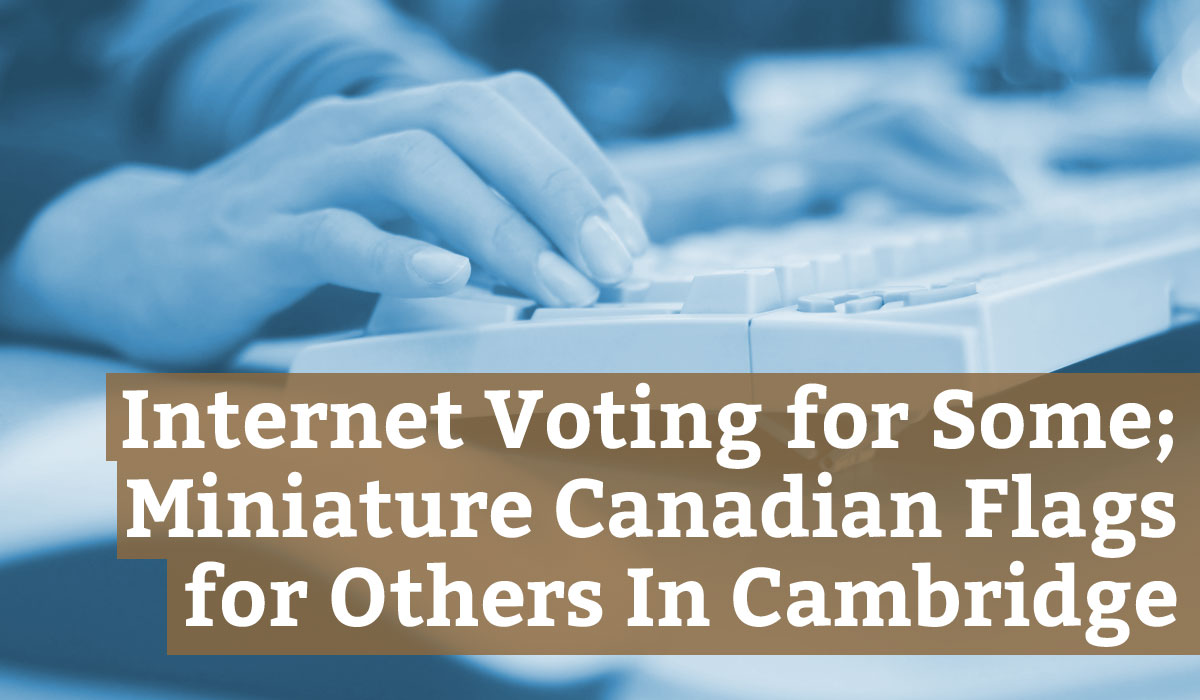 Cambridge city council recently voted to allow for the use of internet and telephone voting for the 2018 municipal election. It will be expanded this time to include the three weeks leading up to and on Election Day itself.

In 2014 these voting methods were only available for the two weeks leading up to Election Day. This was the first time internet and telephone voting was used. Officials had hoped there would be a noticeable increase in voter turnout with the use of internet/telephone voting. In the end only about a one percent increase was realized.

Cambridge was and is the only municipality in the region to use internet and telephone voting.

While internet voting in itself will not irrevocably change municipal elections in Cambridge, it does have the opportunity to enhance the way we vote.

During the council vote several protesters demonstrated outside city hall. They raised security as a reason why council should reverse its decision on internet and telephone voting.

The main concern most have regarding internet voting, as with any business conducted on the internet, is security; including

Significance Of The Act Of Voting

For those who see the ability to vote as part of our civic duty, voting is both a right and a privilege. It has been won in the courts, and defended in times of war. For those, the act of going to a polling station and marking an X is an expression of gratitude for this right and all that has been done to preserve it.

Is The Way We Vote More Important Than Getting People To The Polls?

The truth of the matter, or at least how I see it, is that this isn’t the case. For some, it is simply too difficult to attend a polling stating in person. Whether because of disability, age, illness or other reason, internet and telephone voting ensures everyone has the ability to have their say in how Cambridge is governed. It used to be that you could only light your home by burning candles. Should technology not also affect the way we vote? Internet and telephone voting will not in itself guarantee a more informed/engaged citizenry in the next municipal election. What it will do is give more people the opportunity to have their vote heard.