Getting Ready For Waste Pickup Changes In Cambridge 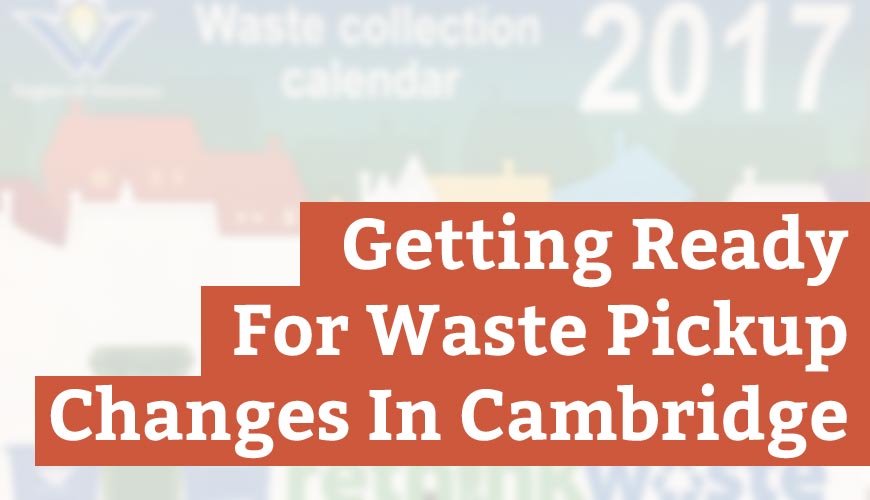 The Region Of Waterloo is changing the way they’re handling waste pickup in March and that will definitely effect how you do your weekly trip to the curb here in Cambridge. Garbage will be picked up once every 2 weeks, while Blue and Green Bin pickup will happen every week. Garbage will now be limited to 4 bags per household, every 2 weeks. Anything above and beyond that needs to be tagged. Now I know the mention of this will send a certain portion of the population into heart palpatations. In our house it’s a rarity we hit 2 bags a week, so I think the 4 bags every 2 weeks should be no sweat. I’ve been doing it for years now, having actively taken part in the Green Bin program since in launched here in Cambridge in 2010. Even with a new addition to my family and the weekly dose of diapers we’ve managed to stay under that limit. As someone who’s already hitting these targets I thought I would share some of the things I’ve down around my house to help cut down how much waste goes direct to the landfill. The Green Bin can definitely be a challenge, but I’ve found over the years I’ve managed to make it pretty painless process overall. First of all, the plastic bin that the region gave you for free is kinda terrible. I’ve actually upgraded my bin twice since the program launched, first to a green plastic number with a filter, then to a stainless steel bucket. I would definitely recommend getting a stainless steel compost bin. With the plastic smells tend to seep out. Not a problem with stainless steel. Plus it looks nicer sitting on your countertop.

The second thing the Region probably gave you was little paper bag inserts. While these work, they are kinda terrible as soon as anything wet might hit the bin. You’re then left layering with newspaper or other filler to try and offset the wetness. Once those bags ran out I think I bought them a few times after and finally just gave up on them. I decided to try the technique of making a newspaper insert in the bottom. While this does entirely work and allows you to reuse all those ad inserts in the Cambridge Times, it’s definitely fallible in the same way the paper bag inserts were to wetness. It also makes a messier transfer to the Green Bin. The solution I found that worked for me was buying the biodegradable plastic bags. The brand I’ve found I like best is actually the Canadian Tire Frank brand Mint scented bags. They just seem to be the right size and you can but them in quantity at a decent price. Using the biodegradable bags definitely isn’t as eco friendly, but it makes garbage day a snap .

As for the bin the Region gave out, I now have that sitting on top of the dryer so I can easily put the dryer lint in it. I probably empty it once every 2 or 3 months since it takes awhile to actually fill the bin. I’ve also picked up biodegradable dog waste bags. So when you have to do the walk of shame carrying your dogs poop home, at least you can just toss it in the Green Bin. Doing all these small things tends to add up and cut down on the waste going to the dump.

The Blue Bin recycling program is probably old hat to most people. Either way I thought I’d share a few things I try to do to optimize to make sure all the stuff that should go in the bin makes it there. Recently we put bins on all 3 floors of the house. While this seems trivial I’ve noticed it does seem to make it so more recycling makes it where it needs to go. I used to find things like toilet paper rolls would always end up in the garbage. Now they find the bin because there’s one actually handy. I try to recycle as much as possible from the bathroom. I wear disposable contacts when playing soccer and always recycle the little holders they come in. Stuff like plastic razor blade trays also get in there.

We usually sort our recycle bin into separate bags to keep things from blowing around. We can typically keep a weeks worth of recycle down to one bin. Every so often we end up with enough to merit two.

I’ve found since integrating the Green Bin into our garbage output tends to be pretty negligible. It’s always dry and doesn’t smell, since pretty much everything stinky goes into the compost. About the only thing that stinks is styrofoam trays that contained meats. Since things aren’t stinky I don’t see much issue with the every second week pickup. I can definitely see the diapers being an issue, so I’m planning on picking up a garbage can with a lid for just that reason. Diapers after one week in the pail are pretty terrible, 2 weeks ought to be quite the treat.

Even with all the changes and optimizations I’ve done, I know I could still do more. I know stuff like tissue tends to primarily make it into the garbage instead of the Green Bin. It’s kind of a pain since most of that kind of garbage is accrued away from the kitchen and nobody really wants to pick through the garbage to separate boogery tissues. We also have a fair amount of plastic that goes in the garbage. Stuff like milk bags that we should probably see about reusing or at very least cleaning out so they cam make it into the recycle. I also find celophane plastic wrappers for stuff tend to end up in the garbage as well.

I look forward to this spurring adoption of the Green Bin program locally. I know walking around in my neighbourhood on garbage day I usually see them few and far between.

Since posting this article I decided to take up the challenge to improve diverting more waste from going in the garbage. I started a loose plastics bags in our recycle bin and have been amazed with how much stuff ends up in it ends up accruing. Cellophane wrap, bags from cereal boxes, hot dog packaging, milk bags etc. I’ve been doing it for 2 weeks now and it’s blown me away how much stuff ends up in a miscellaneous plastic bag.

Do you have any tips to share on waste management in your home? Let us know in the comments