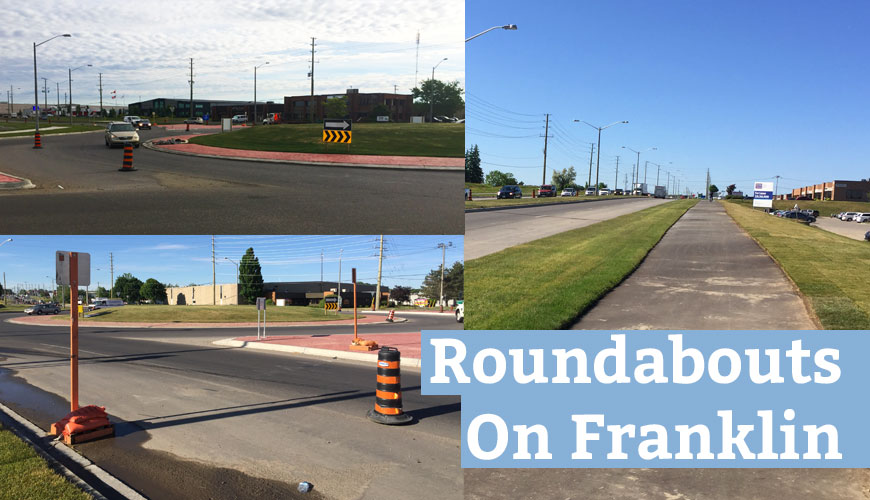 One of the hot button topics over the last few years in Cambridge has been the reconstruction of Franklin Boulevard. The Region Of Waterloo started the project last spring, with the goal to install 11 roundabouts along the length of the road. Since the project was started I’ve pretty bullish on how this is really a transformative endeavour for the City Of Cambridge. As someone who works in proximity to Franklin Boulevard this had pretty directly effected my daily life over the last year and a half. And now that the Bishop Street roundabout is actually complete I thought it would be a good time to talk about the project now that it’s actually functional.

Cambridge as a city is first and foremost a driving city. Owing to the fact this city is comprised of 3 different downtown cores plus the core that is Hespeler Road it really makes it so driving is a pretty integral part of getting around town. That and the fact one of our biggest employers is Toyota could factor as well. With the new roundabouts up and functioning I definitely feel East/West traffic moves so much better through there. As someone who would often take Bishop or Franklin home towards Preston the existing lights were terrible for traffic flow. There was no devoted right hand turn lane, the light was pretty long since at rush hour Franklin traffic tended to get the priority. Now it seems at 4:30-5pm there isn’t often a lot of traffic waiting to cross Franklin and things move through pretty smoothly. Traffic still backs up on Franklin at rush hour, but I would chock that up to the fact the road is still under construction at Pinebush and they don’t actually want full capacity traffic on the road just yet as until recently they had much of that stretch between Can-Amera and the 401 constrained down to one lane.

I took this photo at 4:45pm on July 4th, 2016. I know it’s probably a day a lot of people might have taken a long weekend and it is summer so traffic volume goes down, but this was the theoretical rush hour of the day. No backups in any direction, traffic flowing smoothly. I genuinely feel this roundabout has significantly improved traffic flow in the area. A lunchtime trip up to Hespeler Road no longer chews up 5 extra minutes because you didn’t catch this light both directions.

This is where I feel the biggest improvement has been made. I have a pretty reasonable 5km bike ride to work and my commute has been significantly bettered by the addition of the multi-use path that has been installed. Previously you needed to be some kind of lunatic to bike along Franklin in one of the live lanes, or navigate along the series of rough cut dirt walking paths and adjoining parking lots to make your way down the road. Not ideal in the slightest. Now traveling down Franklin between Sheldon and Bishop almost feels invigorating. Separated from traffic, a nice wide pathway gives cyclists something that practically hasn’t existed before, a viable North/South corridor to travel across the city. Hespeler Road is all sidewalks and awkward to navigate while sharing with pedestrians, cars pulling out and frequent traffic lights. On Franklin getting across a roundabout is actually pretty easy. While I do often have to stop while crossing onto the island, I never experience the 2 minutes of waiting I’d have at the previous red light setup. I now often see other cyclists on the paths coming to and from work, to take a line from Field Of Dreams “If you build it, they will come”.

As I work in the area I’ll often takes walks up to Franklin on my lunch break. Walking down Can-Amera has always been great given the sidewalk and multi-use path, but now there is actually devoted area to pedestrians once you get to Franklin. The section connecting the corner of Can-Amera and the entrance to the Cambridge Sports Park isn’t finished yet, but there is at least a path now. You don’t feel like you’re walking through a beaten path surrounded by tall weeds anymore like it previously was. I have a view from my office of Can-Amera Parkway and can see how many people walk/run/bike down the road in a day. It’s not insubstantial. It’s great that they’re now trying to connect this artery road to the busy Franklin corridor.

Still A Long Way To Go

While the Bishop Street, Sheldon Drive and Savage Drive roundabouts are finished, there’s still a lot more work to do. The Pinebush roundabout looks to be about halfway done now. I haven’t been up the other direction in awhile but I know Clyde Road and Main Street were still a disaster last I saw. And that’s only 6 of the 11 to be built. So safe to say there will be a lot more traffic headaches ahead even as certain parts are now finished. But really the roundabouts are only a portion of the story. The additional multi-use paths are really a boon to our community as a whole. They’ve taken an inaccessible urban jungle and made it actually functional for more than just cars. Along with laying sod and adding greenspace to our community, I think if they plant some trees along the paths and in 10-15 years Franklin Boulevard could look downright aesthetically pleasing. That would be a big change for a road voted worst in Waterloo Region.

Now if only we could get more roundabouts on Conestoga Boulevard to fix those terrible intersections.