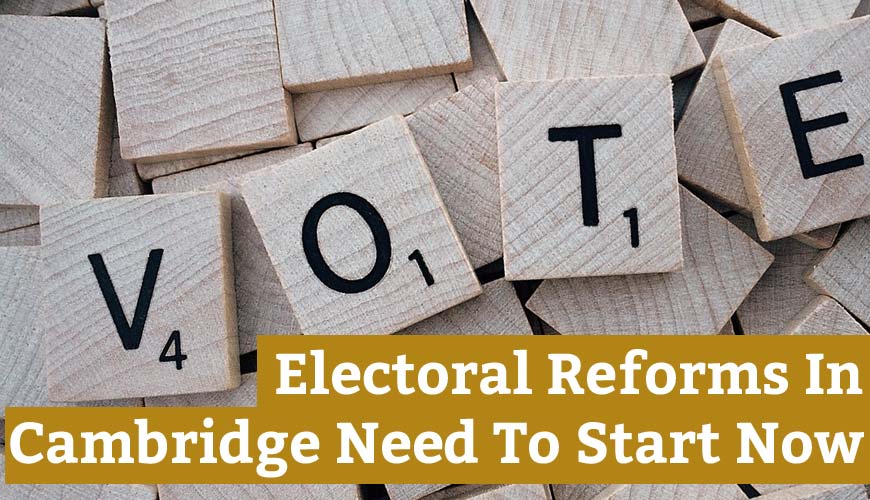 Back in September Cambridge city council opted to keep the first-past-the-post system for electing members of council. City staff made the recommendation not to adopt the ranked ballot system, which is now an option for municipalities in Ontario.

Council members expressed concerns that a new system would create confusion that would lead to low voter turnout.

“Introducing this will be a nightmare,” said Counsellor Frank Monteiro. His concern is the existing system of electing city and regional representatives is “confusing enough” for many people. “I think you should be careful how you approach this, see how this is going to be applied.”
– Cambridge Times September 28th 2016

In addition to sticking with a first-past-the-post system for 2018, council instructed the clerk to come back with what Mayor Doug Craig described as “a game plan” for how to educate residents about ranked ballots and what would be involved in making it a referendum question for voters.

A referendum on the way the people of Cambridge vote for their city council is a great idea, as long as it is executed properly. The question on the ballot needs to be clear. People need to understand the choice they are making and how it will impact them going forward.

Here is a brief look at the voting options that Cambridge is considering, with the pros and cons of each.

Currently, the people of Cambridge elect their members of council using this system. The city is broke up in to a series of wards. Members of the public put their name forward as a candidate in a particular ward. On Election Day, voters choose which person they want to represent their ward. The candidate with the most votes in each ward is elected to council.

Would it have made a difference in Cambridge in 2014?

When we look at the 2014 election, the failure of first-past-the-post is particularly evident in two races.

Candidate Mike Mann becomes the councillor for ward 3 with only 1/3rd of the popular vote. This type of thing tends to happen in ward races with lots of candidates.

The Cambridge Ward 6 had a very contentious result, skewed by the FPTP system.

The winning candidate Shannon Adshade wins the seat by 2 votes over Gary Price. Neither of the top two candidates had a plurality of the votes, but if the people who supported Colin Slingsby had to take a second choice, either could have won.

The issues around electoral reform are complex. Campaigns to change the way people vote in Ontario and BC provincial elections failed in part due to misinformation and confusion of the voters.

In order to ensure a fair referendum is held, the city will need a focused education campaign to inform the citizens of Cambridge what they are being asked to decide. The people need to be able to ask questions and have their concerns heard. With the 2018 election a little over 18 months away, it needs to start now.