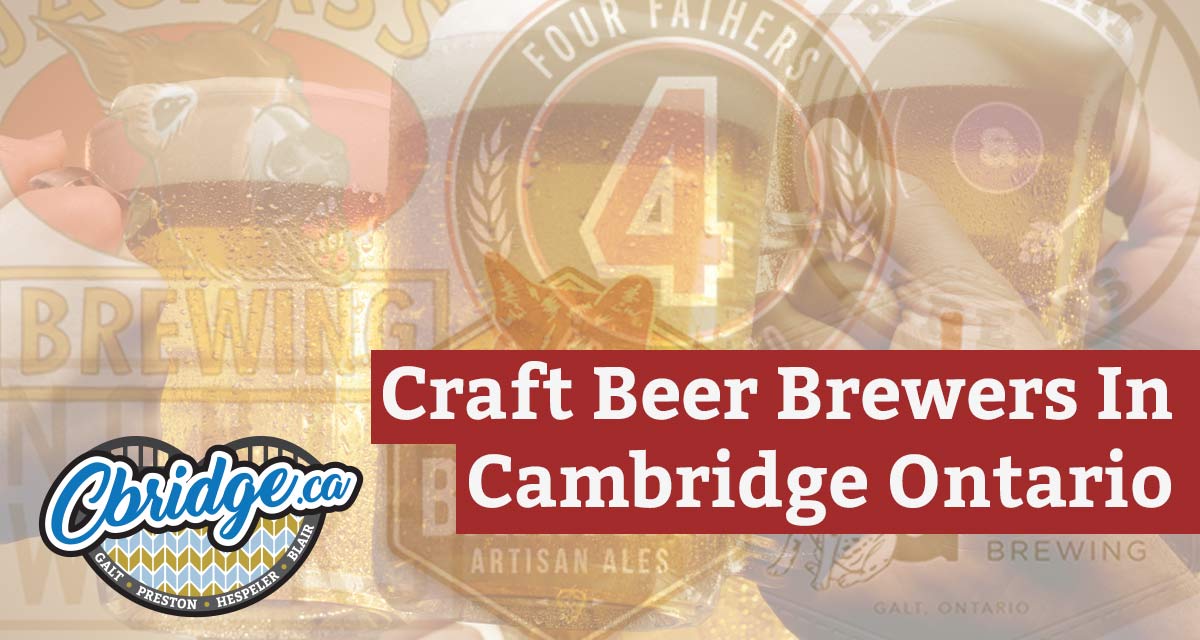 Cambridge has become a hotbed for craft beer in recent years, and by the end of the year we could have as many as 8 different breweries in town. While this may seem like a new phenomena locally, Cambridge actually has a long history of brewing beer. Stretching back to 1846 when Henry Bernhardt opened in Rock Springs Brewery in Preston, this area was quite famous for growing hops. Where the Speed River meets the Grand River you can still find hops growing in what was known as the Preston Hop Yards, once regarded as the “largest hops yards in the Dominion”. In fact, hops still grow there and served as the basis of a cream ale brewed by TWB Cooperative Brewing in Kitchener last year. So Cambridge definitely has a rich history in beer that these new brewers can tap into. Grand River Brewing is the elder statesman of craft brewing in Cambridge, having been in operation in the old Galt Knife Company factory since 2007. They have a wide variety of brews, with many taking their cues from Cambridge’s history. In 2017 they opened a brewpub in their location, so there’s now even more reason to check them out. Many of their beers are available in tallboy cans to take home, as well as growler fills. This is the one brewery that seems to be the most established name in the craft beer scene, as they’ve been in business for 8 years and are now moving their headquarters to Hespeler. I’ve driven by the site quite a few times looking for any outward signs of activity, but they don’t seem to be tipping their hand too much. There will apparently be “a sizeable social space for customers”, which definitely sounds promising. Barncat Artisan Ales is truly a microbrewery. Their Twitter bio proudly boasting about the fact they’re only open 7 hours a week always gives me a chuckle. Even with short hours Barncat has managed quite the local following, with their taps rotating weekly with new creations. Their website is pretty good at keeping you posted on what they have on tap for the week. They deal pretty much exclusively in Growler fills, in litre and 2 litre sizes. JackAss Brewing is now open as of February 23rd, 2018. Brothers Wayne and Keith been working their asses off and the new location on Sheldon Drive looks great. Featuring a seating area, and bar it’s a welcome addition to the Cambridge microbrew scene. After opening on Canada Day of this year, North Works is the newest brewery to open its doors locally. I popped in this weekend and was quite impressed. They have a nice bar area with a few tables so you can hang around for a bit. As they’re still pretty new to me I’m not sure if they have set brews, or run a setup similar to Barncat with a constant rotation of taps. North Works offers crowler fills, a 1 litre can filled fresh with your choice of brew, then capped right at the bar. They will fill growlers, though don’t offer them for sale. Opened in May 2018, Rhythm & Brews is looking to become a destination for music fans and beer lovers. After talking to the owner I’m definitely looking forward to when they start having trivia nights as well. They have a bunch of regular beers, as well as new brews that switch over. You can buy bottles from their cooler as well as get growler fills. Brewmaster Scott Pautler is bringing his award winning brews to Preston, with a new brewery and distillery, with 8 taps, a cocktail menu and event space. The new brewery opened March 14, 2019. Can’t say there’s too much info about Hespeler Brewing Co aside from their Facebook page at this point. I’ll update when I get some more info.