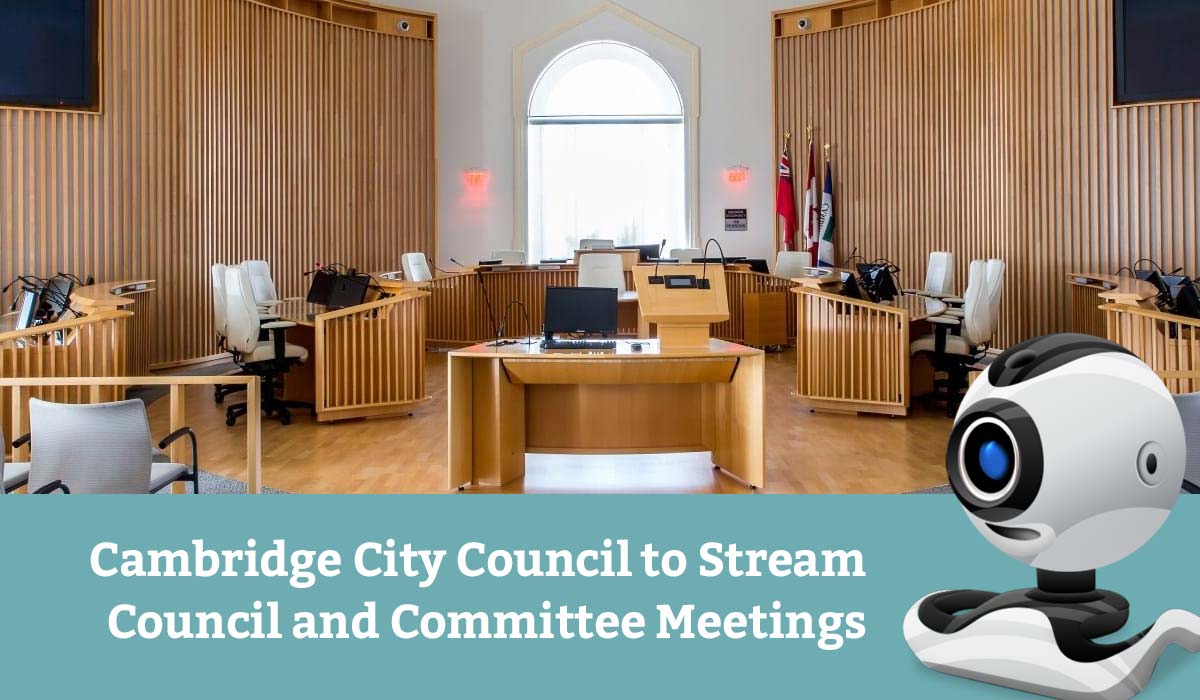 The City of Cambridge is now streaming council and committee meetings on the internet. The initiative started with the June 6th Planning and Development Committee meeting. This is a big change for the City, as previously Council was only broadcast on Rogers. This excluded many people from accessing the content readily if they were with rival cable companies like Bell, or had cut the cord on paying for television service.

“We want the community to be aware of what goes on at city council meetings and to participate in the decision-making process as much as possible,” said Mayor Doug Craig in a recent Cambridge Times article. “We recognize that people have busy lives and not everyone can make it to these meetings. We hope this new service will help engage and inform our residents about the discussions taking place.”

The initiative is part of the city’s strategic plan, Cambridge Connected: Our Voice, Our Vision to be more open, accountable and transparent.

In the past, Rogers local TV broadcast council and committee meetings. The web streaming alternative will not only allow citizens to watch meetings live, but also access archival video of previous meetings.

The live webcast can be streamed at here. Paired with continuing to use internet and telephone voting in the next municipal election, the city should be commended for making it easier for the citizens of Cambridge to be engaged in how the city is run. It ensures those with mobility issues, illness and those unable to attend in person due to work conflicts/schedules that they are able to fully participate in the decision-making process.

What Else Can Cambridge Do To Increase Engagement/Participation?

Online petitions: In 2015 the federal government passed a motion put forward by NDP MP Kennedy Stewart. The motion stated that e-petitions that garner at least 500 signatures and are sponsored by an MP can be tabled in Parliament. If adopted in Cambridge would give citizens greater access/ability to put forward issues they want to discuss in council. Reasonable conditions would also prevent frivolous/unreasonable ideas from being considered, such as this petition for the US government to build a working Death Star.

Open data: The City of Cambridge has embraced the idea of open data, sharing municipal data with the public to use as they wish. View the data catalogue here. You can also provide feedback on the site and the data you would like shared by sending an email to [email protected].

How else would you like the city to improve engagement? Have your say in the comments below.