Cambridge And Being Engaged In Waterloo Region 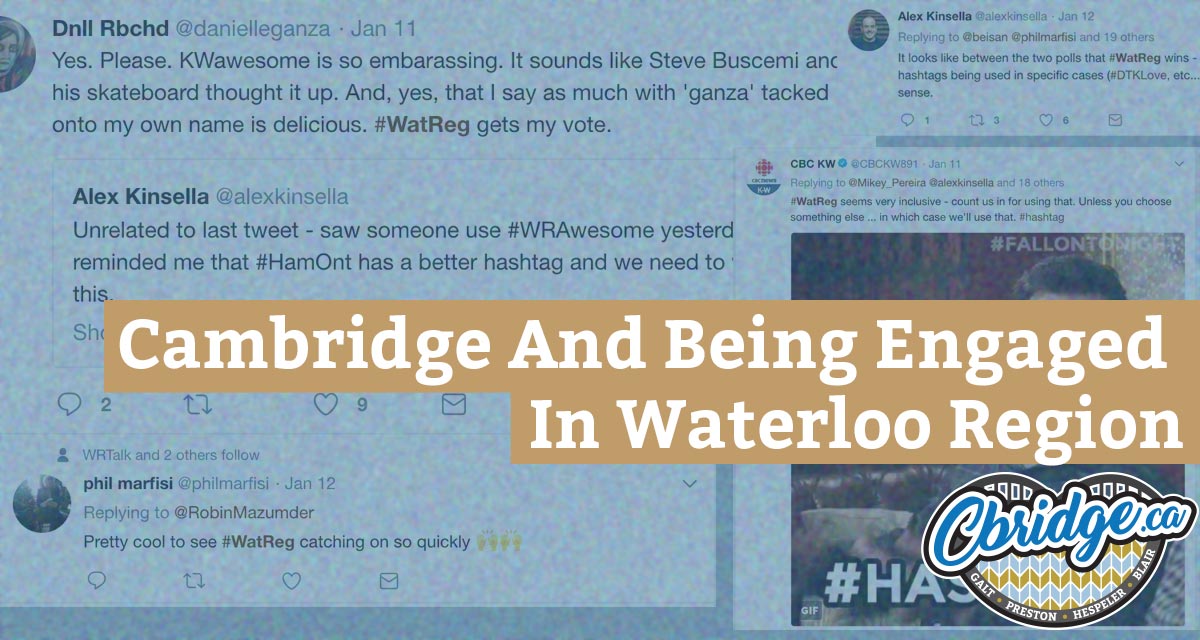 This week a conversation popped up on Twitter that seemed to set the local community ablaze. Alex Kinsella, a local digital marketer and all around good guy, proposed an idea of a new regional hashtag to replace some of the older ones conceived long ago on Twitter. Something that could be used and be representative of Waterloo Region and that could be used across the region.

Unrelated to last tweet – saw someone use #WRAwesome yesterday and it reminded me that #HamOnt has a better hashtag and we need to work on this.

Now I wrote previously a post about the #Cbridge hashtag, so you could say I’m a keen observer of local hashtags and their usage. This conversation was definitely relevant to us here in Cambridge as part of Waterloo Region. A hashtag that speaks to the region as a whole is definitely something important, and extends beyond Twitter to other social networks that employ hashtags. They’re an important way of organizing and classifying information in the digital age, as silly as that may sound to non-social media folk.

The conversation started out pretty productive, with people throwing out ideas and the pros and cons of them. The thread got borderline ridiculous, with over 20 people being @ replied, including the likes of Mayors Berry Verbanovic and Dave Jaworsky and former Waterloo Mayor Brenda Halloran,  jumping to the conversation. Local members of the press like Greg Mercer (The Record) and Jeff Pickel (570 News) also piped in. Much of the consensus seemed to lend to the #WatReg tag.

Okay fine, let’s do a science.

Which hashtag do you prefer for stuff going on in Kitchener, Waterloo and Cambridge?

Having these voices in the conversation is important because these are the people who need to push buy-in. Local media and politicians have thousands of followers on social media, so their adoption of a new standard hashtag is very important to them. When you post an article or cities have important news to push out, getting it to the largest local audience possible is crucial. You want adoption to spread across the region so it becomes the defacto standard when talking about Waterloo Region.

Cambridge Is On The Outside Looking In

While something like a hashtag doesn’t matter in the grand scheme of things, it does speak to the way things get done in the Region. The leadership in Kitchener and Waterloo are actively engaged on issues and often are on the same page with each other. Their mayors are out there at ground level, getting involved. Politics doesn’t happen just at City Hall anymore. It’s on Twitter, in Facebook Groups or on local blogs and it’s happening all the time. Cambridge is often behind the 8-ball because they’re not involved in the online community on the same level as those in K-W. By not being engaged in regional conversations we’re being done a disservice. When it comes time for decisions to be made regionally, Cambridge often wonders why they get the short end of the stick. With elections coming up I’d love to see candidates that are actively engaged online and not just during the election cycles. It’s very easy to be a lurker on social media, it’s much harder to actually engage with issues at the ground level, and that’s what having an active social media presence is about.

Easy To Get Overlooked When You’re Not In The Conversation

As the conversation moved along you could see a few people making suggestions that were a little more self-serving, focusing on KW and Waterloo as the central focus. While these were mostly ignored and brushed aside, you can see how certain people in Kitchener and Waterloo think. The idea that using a hashtag like #WatCan, #Wloo, #KWOnt for the region would somehow fly with people living in Cambridge, or Kitchener, or North Dumfries, Woolwich, Wellesley and Wilmot Townships. While it’s inherently confusing to have a City and the Region named the same thing, that’s why it’s important to come up with something that is inclusive for everyone in Waterloo Region. I can recall similar conversations going on back in 2010 when the hashtag #kwawesome was created. Many people could not seeing how divisive referring to the region as a whole as K-W and the rest being implied might be. An example of this is K-W Oktoberfest not really being a thing in Cambridge, even though we do have a fest hall every year. I believe part of the issue is that it’s never going to be our festival if it’s under the K-W banner. The folks in Cambridge don’t want to be K-W’s afterthought.

Cambridge residents, do you partake in regional Oktoberfest activities?

A few days after this conversation it seems like the new hashtag is taking hold on Twitter and Instagram. So if you’re from Cambridge and looking to spread your message across Waterloo Region, try using the new #WatReg hashtag.