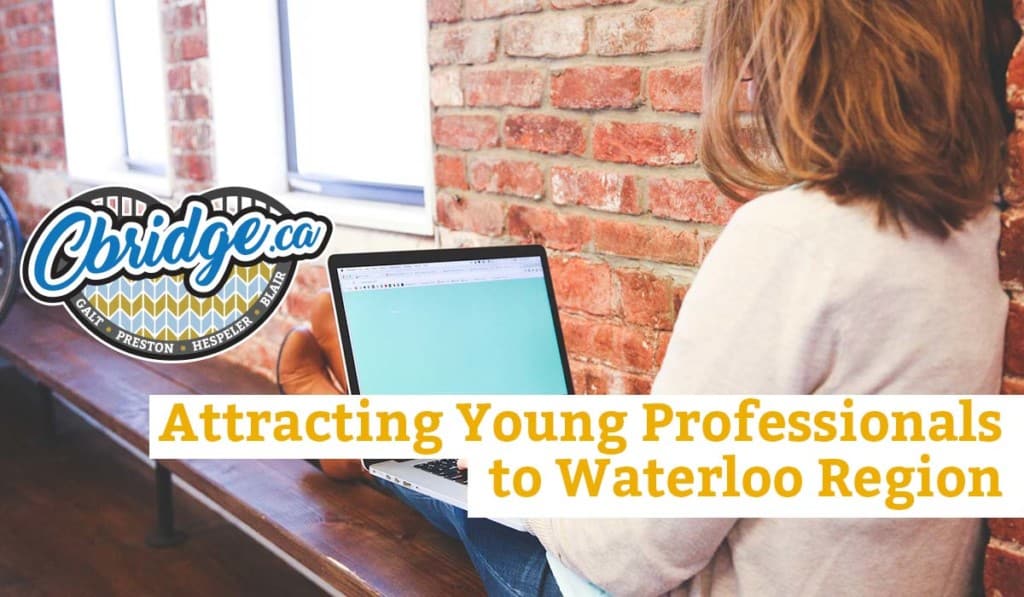 Municipal leaders in Canada consider attracting young professionals to live in their cities as a key reason to keep up urban prosperity. It is a key factor in maintaining economic growth. In Cambridge, young people will become more important to the local economy as they will make up a larger proportion of the workforce.

The Waterloo Region Census Bulletin 2016 underlined the trending aging population of the region:

The baby boomer generation, represented in the population pyramid by those aged 52 to 70, peaking at the 50 to 54 year old cohort, is contributing to Waterloo Region’s steadily aging population. This generation is made up of individuals born in the time of prosperity following the end of WWII, often defined as the period between 1946 and 1964. In 2011, the first of the baby boomers reached the retirement age of 65. As this generation continues to grow older, the number of seniors will increase, and by 2029, all of the baby boomers will be 65 or older.

What are the Cities in our region doing about this?

What does this trend mean for the region?  Do our municipalities consider attracting young professionals a priority for maintaining the prosperity of Kitchener, Waterloo and Cambridge? Much of the talk in this municipal election has talked about catering to an aging population, why hasn’t there been a focus on what we’re planning to do to attract younger people to our communities and incentivizing them to put down roots in our region?

To get the answers I was looking for, I reached out to the municipal governments in our area. The City of Guelph has a generic email address to send questions or concerns, while Cambridge, Kitchener and Waterloo have online forms that allowed me to submit my question.

The City of Guelph responded in the shortest amount of time and in the most meaningful way. Mayor Cam Guthrie took the time to personally respond with a phone call, demonstrating a level of engagement we can only hope to receive from our municipal leaders. A follow-up email was sent detailing what we discussed.

My inquiries to the City of Kitchener and Waterloo were forwarded to municipal employees who responded via email. I would like to thank them for taking the time to reply to my inquiry.

Only the City of Cambridge failed to respond to my original request and follow-up. Only after getting in touch with a direct contact with the city department did I receive a reply. As a contributor here at cbridge.ca this was somewhat disappointing that I had to chase down a response.

After compiling the responses, I broke them down into categories. These categories represent key factors that appeal to young people and appeal to them in a particular way. They are:

Not all responses spoke to all the categories. I have summarized each response as articulated by the municipality.

The City of Kitchener’s Love My Hood Strategy focuses on building friendly neighborhoods. The city provides resources to people and community groups to help communities deliver improvements and activities that are locally driven by residents.

In order to attract young professionals, the City of Guelph has fostered initiatives to build residential condo developments in the downtown core. These developments are more affordable to young and first-time home owners.

The City of Waterloo is making major investments in light rail transit (LRT). They are also creating new bike lanes in Uptown Waterloo, and dedicated bike lanes are being extended on some regional roads. The city is developing a new vision for the University Avenue Corridor.

The City of Waterloo is working to promote the Toronto-Waterloo Innovation Corridor. They continue to invest in Hackathons with the University of Waterloo to attract young talent to the region.

The City of Kitchener has focused on building an Innovation District, to support a startup/entrepreneurial culture, and supporting businesses that are looking to expand. These initiatives are part of the Make It Kitchener strategy. Within City Hall they have started a Digital Innovation Lab, aiming to use technology to improve municipal government and make a smarter city.

Events such as the True North Conference which was recently held in Kitchener showcased initiatives in order to draw young professionals to the area.

The City of Waterloo has created a new Arts and Culture team under the Chief Administrative Officer’s office with a mandate to enhance culture in the city. It has passed a Culture Plan that they are in the process of implementing. Other groups are being proactive in marketing events in the city including the Uptown Business Improvement Area (BIA), Communitech and WaterlooEDC. The David Johnston Research and Technology Park at the University of Waterloo is hosting more beer festivals and recreational events.

The City of Kitchener views festivals as a visitor’s first exposure to the city and a favourable impression can result in a decision to relocate to Kitchener. The City hosts the Kitchener Blues Festival which attracts people from all over Ontario and the United States. Kitchener is also well-known for its annual Oktoberfest festival.

The City of Cambridge supports arts and culture through projects like the Old Post Office along with special events which create a community in which people want to live and work.

The City of Waterloo is investing in modern park spaces including the makeover of Waterloo Park, Waterloo Public Square and the building of new parks (Northdale Park). The City has purchased 2 sites for new park spaces (a >$20 million investment).

Waterloo The City is also encouraging developers to add new amenities such as the proposed science centre, new mixed use buildings (cafes and restaurants).

The City of Kitchener also believes that providing public facilities is key to attracting young people. These include community centres, libraries and recreational facilities. Kitchener has an acoustically perfect centre for the performing arts in the Centre in the Square, an art gallery and a museum downtown.

Kitchener has also focused on building a vibrant downtown for the past 15 years.

The City of Guelph is investing in revitalizing its downtown core. It is encouraging the development of heritage buildings to promote growth and economic development.

The City of Cambridge has emphasized investments in infrastructure such as streetscapes, trail development, bike lanes, recreation facilities as key to attracting young talent.

Cambridge has been building projects like Grand Innovations in the Gaslight District (which is now home to a Conestoga College research and development lab) and various large-scale condo projects in the downtown cores. While it is a good start, it seems like Cambridge doesn’t have any fully fleshed out plans forward like nearby municipalities already have in place.

A Race For Talent

In comparing answers provided by each city and performing a completing this comparative analysis, it is reasonable to assume the City of Cambridge is lacking some of the focus on attracting young professionals key features that its closest neighbors have for attracting young talent. Cambridge is in a race to attract the next generation of young professionals that will power our future economy, but we’re currently not doing enough to stay competitive with our neighbours.