A Cambridge Connection To The SNC-Lavalin Story? 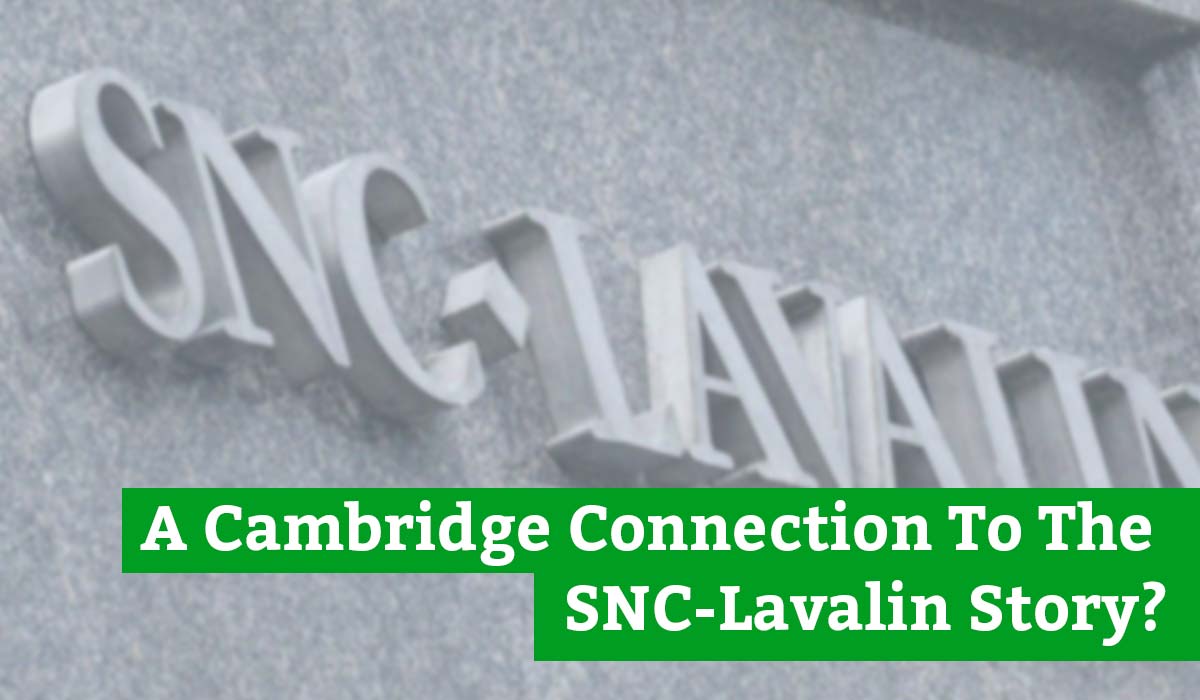 The current scandal involving the criminal prosecution of engineering firm SNC-Lavalin Group Inc is dominating the headlines. It has caused the federal government and Prime Minister Justin Trudeau much trouble, especially in the context of an upcoming federal election. The government has lost two cabinet ministers and is being charged with political interference in a criminal case.

The Liberal government introduced legislation to give federal prosecutors a new tool to deal with companies facing criminal prosecution. The legislation to create the process of a deferred prosecution agreement (DPA) was enacted as a provision of the omnibus budget implementation bill (Bill C-74) in June 2018. Sentencing and remediation agreements would be negotiated under the supervision of a judge, between federal prosecuting authorities and a corporation charged with an offense, usually in the context of fraud and/or corruption.

Before the bill passes, SNC-Lavalin contacts the Public Prosecution Service to discuss the possibility of a deferred prosecution agreement. After consideration the prosecution service says it will not offer SNC this option. The company meets with senior advisers in the Prime Minister’s Office to discuss issues of “justice and law enforcement”.

In January, Prime Minister Trudeau moves Justice Minister Jody Wilson-Raybould out of her portfolio and is named the new Minister of Veterans Affairs. Weeks later a story in the Globe and Mail, citing unnamed sources reports that the Prime Minister’s staff attempted to pressure then Justice Minister Wilson-Raybould to intervene in the case involving SNC-Lavalin. It alleges her lack of co-operation was the reason for her being removed from the justice portfolio.

A bribery and fraud conviction against the company would bar it from bidding on any federal contracts for 10 years and would allow federal authorities to cancel the company’s current contracts if deemed necessary.

What Is At Stake?

With the allegations of improper political interference, I think the real issue of the matter is being ignored. In a country that prides itself on it being a nation that follows the “rule of law” should we be offering companies like SNC-Lavalin the opportunity to avoid prosecution for their corrupt behavior? Is corruption and bribery just the cost of doing business when competing with international firms on domestic/foreign infrastructure projects?

The Prime Minister has defended his actions in the scandal saying his government will always act to protect Canadian jobs. The government believes that if SNC-Lavalin isn’t offered a deferred prosecution agreement, Canadian jobs would be at risk. As columnist Jaime Watt wrote in the Toronto Star “In the case of SNC-Lavalin, Canada faces the very real threat that one of its top companies and employers will move, sell, or disappear if they are subject to a conviction. At the very least, they would be forced to shed a significant number of jobs as a result of their long-term disqualification from public sector infrastructure projects”.

The scandal, which at times seems like something only for those in the so-called “Ottawa bubble” does have a Cambridge connection. In November 2018, SNC-Lavalin with partner Eclipse Automation Inc. was awarded a $33 million production tooling contract to support Bruce Power’s fuel channel and feeder replacement (FCFR) project. The manufacturing will take place at SNC-Lavalin’s Sheridan Park campus and at Eclipse’s Cambridge manufacturing facility. Delivery will be completed by September 2019. Eclipse Automation is a supplier of custom automated manufacturing equipment for the life sciences, energy, transportation, mining, industrial/consumer, and electronics/telecommunications industries.

Should this be taken in to consideration? No, it shouldn’t. A company convicted of bribery and illegally funneling money to political parties need to face consequences for their actions. If we truly are a country that follows the rule of law, the law needs to apply equally to everyone, regardless of what it means for the rest of us.