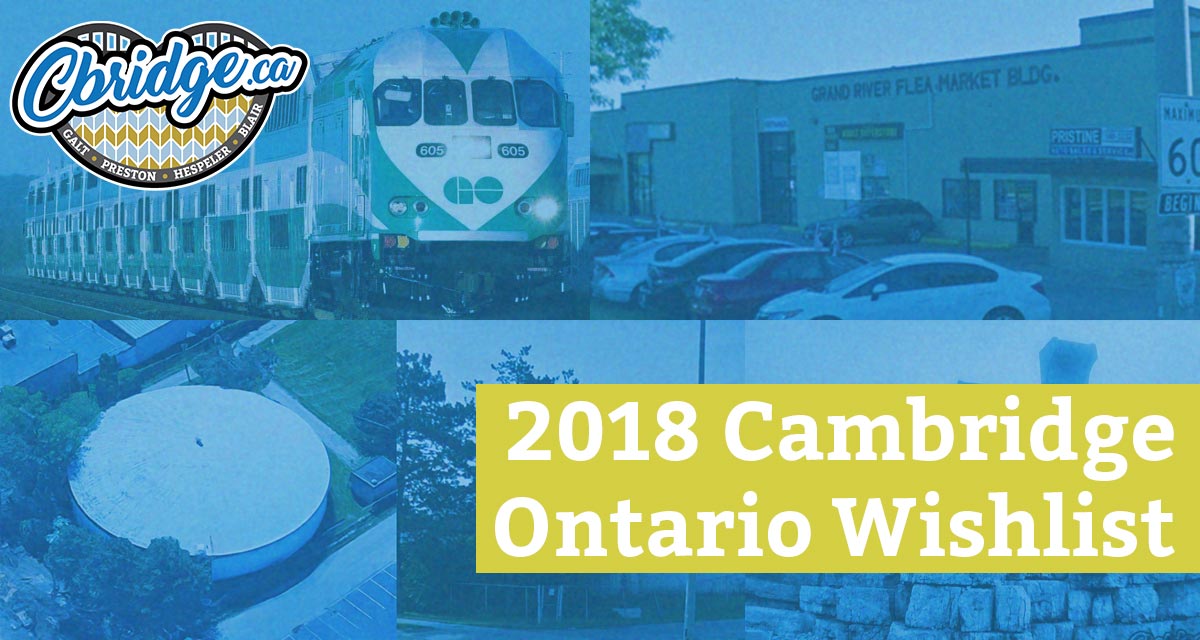 To kick off the new year I wanted to put together a list of a few ideas I’ve had that feel achievable for Cambridge in 2018. It’s an election year both for provincial and municipal government, so new ideas and vision are definitely things that should be on the forefront for us locally in Cambridge.

An Actual Plan for redeveloping the Flea Market property

This one has been on my list for a very long time. This property was under consideration as a site for the Multiplex, though that talk seems to have died down as the process has moved forward. But lets not lose sight of the fact the flea market is a dump(quite literally, in case you’re still wondering what’s really underneath Wedge’s & Woods) and needs to be redeveloped. I know in conversations on local Facebook forums I’ve heard rumours that the owner of the property has big plans to develop. Well it’s time to “piss or get off the pot” as the old saying goes. As we’ve seen with a project like the Gaslight District, if a developer wants to get a project moving quickly, they can and will. This property is along the proposed LRT route and could be repurposed into any number of things. It’s time to actually formulate a plan. The whole stretch between Dunbar and Can-Amera should be redeveloped and it would be nice to see some positive steps to achieving this. Cambridge deserves better than an ugly yellow monstrosity at the centre of the city.

While I don’t like the eyesore that is the current site, I don’t have anything against the flea market itself. If I’m spitballing ideas, I think the perfect location for the flea market would be in the old Northstar Aerospace building on Bishop. I’m taking the fact that a dog training business is now running in the building and they have For Lease signs that it’s possible that the building is now a viable place to setup shop. This stretch seems to be finding new life lately, with many businesses opening up shop nearby.

I’ve driven down Pinebush Road near the Franklin Roundabout for years and have seen this pumping station and wondered why it’s such an eyesore? There’s peeling paint and recently graffiti tags painted on the front visible by the road. I would love to see the Region Of Waterloo fix this by getting someone(or multiple artists) to do something creative with the exterior of the building. Put out the call for art submissions and pay an artist to use it as a canvas. We’ve obviously seen what something like the Cambridge Street Art Festival can do for creating gorgeous visuals in unexpected places in Downtown Galt. I want to see the same principle used to address this resevoir. It’s literally a blank canvas that could be made into something dynamic in a part of town that isn’t known for it. Imagine painting something on the domed roof that would be visible on the satellite view of Google Maps. Like our own little local Google Map Easter Egg.

This is the long term struggle locally, but I would love to see some progress on this made in 2018. It’s an election year and I’d love to see some firm commitment from provincial government about this issue. GO Train service to Kitchener is virtually useless to people living in Cambridge. For commuters heading to the GTA, driving into the congested Kitchener core to take the GO Train is adding an extra hour in the wrong direction to people’s commute. It’s why very few people from Cambridge actually use the service, since it’s not convenient in the slightest. Cambridge is home to lots of commuters travelling the 401 corridor, they deserve viable alternatives to driving into the GTA that doesn’t serve Kitchener-Waterloo first and foremost.

Liberals make commitments when campaigning. Must be an election in the offing. But why not in Cambridge where it is more feasable and a Liberal MPP may possibly lose her precarious seat? @Kathryn_McGarry #onpoli #2WayAllDayGO #Cbridge https://t.co/YygvVFeOh7

Get The Fountains In Front Of Home Depot Working Again

We shared a picture recently that seemed to stir up a fair amount of local sentiment on this issue.

Instagram and Twitter both lit up with comments about getting the fountains back working again. This was actually a point raised by Paul Langan back in 2014, and 3+ years later nothing has happened on this front. Now I’m not sure if the responsibility of this falls to Home Depot(who obviously slapped their sign in front of the former sculptures), or to the SmartCentres who own the property.

This is one of the main gateways into Cambridge and was the point of where the former borders of Galt, Preston and Hespeler met. I’ve heard mixed info on this, but I believe the sculptures themselves are supposed to represent the city, town and village that came together to form Cambridge. My father-in-law used to call it the 3 Sisters, though I’m not sure if that is the formal name. These sculptures and the fountain may not mean much to Home Depot and the SmartCentres, but they do mean something to the people of Cambridge. Big box stores are typically used as a bad word, but wouldn’t it be a great way to garner some local goodwill by getting the fountains working again for next Spring?

What’s on your wishlist to see in Cambridge in 2018?